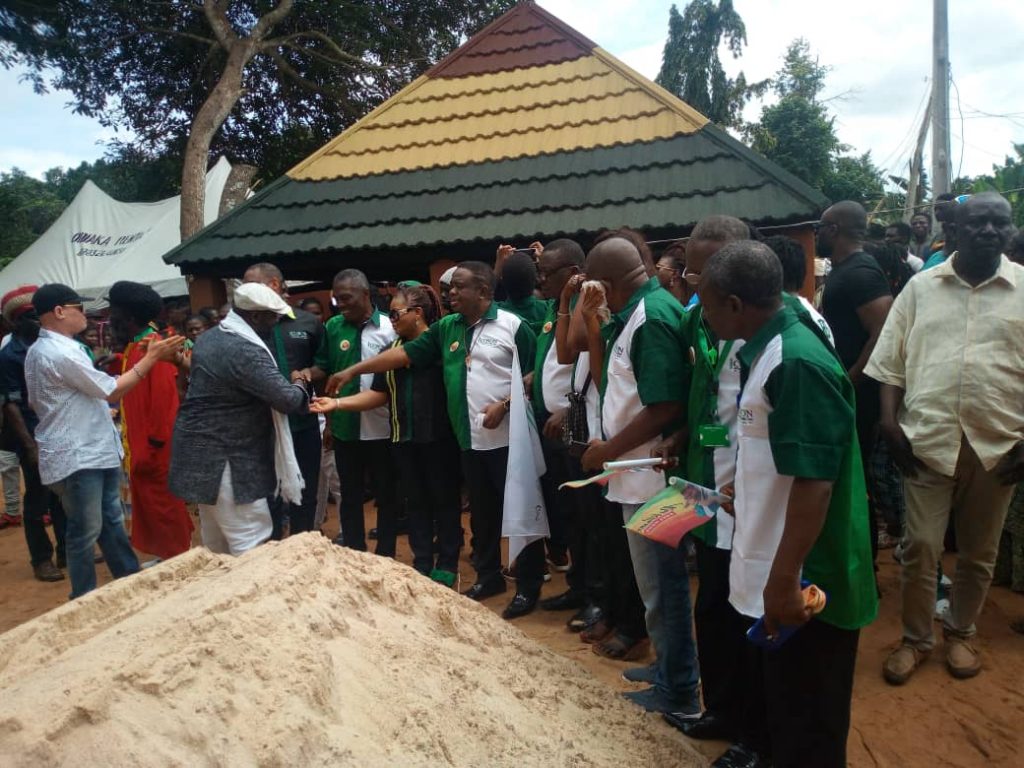 The Onicha-Olona in the Aniocha North Local Government Area of Delta State home of the late legendary reggae singer, Ras Kimono, on Saturday, drew politicians, entertainers, friends and reggae lovers who paid their last respects to the reggae icon.

Many artistes such as Orits Wiliki, Opa Williams, Daddy Showkey, Buchi, Yellow Man, Righteous Man, Candy Sea and Bright Chimezie, were among those who attended the final burial rites held at the deceased’s family compound.

The casket bearing the remains of the popular musician was designed and dressed in Rastafarian colour as relatives, colleagues and fans trooped to have a glimpse of his remains before being finally laid to rest.

His corpse was interred at exactly 3.20pm. Many of the attendees like Wiliki, Daddy Showkey sobbed uncontrollably.

A cleric of the Asaba Diocese of the Anglican Communion, Ven. Dr. Ogom Josiah, who said the final prayer for the late musician, said the late singer touched lives with his talent. He urged the sympathisers who thronged the community to use their talents for God and mankind.

The Chairman, Copyright Society of Nigeria, Tony Okoroji, who spoke at the ceremony, appealed to Nigerians to support the children the deceased left behind.

Okoroji said, “Ras Kimono is unbeatable, ‘unpiratable’ and wonderful. He was a Nigerian like no other. We don’t mourn him, we celebrate him. Kimono didn’t drink, smoke nor eat meat, yet he was great in his chosen field.

“As we say goodbye to this lion, let us remember that he had no father, mother, brother and sister but see the way the world has honoured him. We should unite to support the daughters he left behind.”

The Delta State Governor, Dr. Ifeanyi Okowa, was represented at the event by a delegation led by the state Commissioner for Youth Development, Mr. Karo Ilolo.

A representative of the Aniocha Federal Constituency at the House of Representatives, Mrs. Ameachi Mrakpor, the state Commissioner for Culture and Tourism, Mr. Bazim Chinye, who is also a native of the community, and a member of the state Assembly representing Aniocha North, Mr. Emeka Nwaobi, also graced the event.

Some Nollywood artistes and producers were also at the ceremony.