The money was recovered and subsequently confiscated in Jersey, Channel Islands, on the request of the United States of America Government.

Late Abacha was said to have laundered the money through the US into the Channel Islands before his death in 1998.

According to a report by Metro UK on Tuesday, the money was put in accounts held in Jersey by Doraville Properties Corporation, a British Virgin Islands company.

The report said the money was now being held by the government until authorities in Jersey, the US and Nigeria came to an agreement on how it should be distributed.

It was gathered that Jersey would keep the £211m loot in its Criminal Confiscation Fund, which could be used to pay for a variety of projects on the island.

The report added that more money held by Doraville was likely to be seized and paid into the Civil Asset Recovery Fund in the future.

Jersey’s Attorney General, Robert MacRae, said, “In restraining the funds at the request of the United States of America, through whose banking system the funds were laundered prior to arriving here, and in achieving the payment of the bulk of the funds into the Civil Asset Recovery Fund, Jersey has once again demonstrated its commitment to tackling international financial crime and money laundering.”

It was learnt that MacRae had applied for the restraining order over the Jersey bank account balance of Doraville in 2014, which the Jersey’s Royal Court granted.

However, Doraville applied to the Royal Court for the restraint order to be discharged, but the court dismissed the application in 2016.

A year later, Doraville challenged the Royal Court’s decision, taking the case to Jersey’s Court of Appeal, an appeal that was rejected.

After the appeal’s rejection, Doraville made an application to appeal against the restraint order before the Privy Council, Jersey’s ultimate appellate court.

However, the Privy Council rejected Doraville’s appeal in February 2018.

By the time Abacha died in office in June 1998, he had reportedly stolen an estimated $2.2bn from the country’s coffers.

His then-National Security Adviser, Alhaji Ismaila Gwarzo; his son, Mohammed Abacha; and best friend, Alhaji Mohammed Sada, were alleged to have played a central role in the looting and transfer of money to offshore accounts.

However, the Director of Information in the Ministry of Finance, Mr Hassan Dodo, could not be reached for comments on the seized funds as calls made to his mobile phone were not answered, while a text message sent to him was not responded to.

The PDP recalled that the President had once defended the late head of state and proclaimed him a saint.

It said that because Buhari served in the government of the general whom millions of dollars had been traced to, the President had been defending him “when it was clear to all that the late general stole Nigeria dry.”

The National Chairman of the PDP, Prince Uche Secondus, said there was nothing on ground to indicate that the looted funds would not be stolen again.

He said, “It is sad that we continue to hear about the return of stolen funds by the former head of state.

“Funny though, the President had described the former head of state as a saint, saying he never stole anything.

“The continued return of the stolen money must be a source of worry to the President and the Federal Government that the man they had proclaimed as a saint stole to that extent.

“I am, however, worried that there is nothing to indicate that the money will not disappear again.

“There is no monument on ground to tell us what repatriated cash was spent on. So, the recently announced stolen funds may also end same way.” 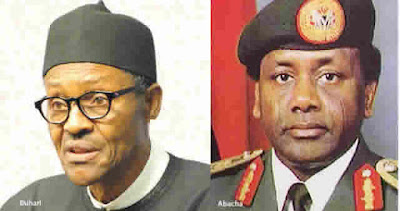 The African Democratic Congress also said any literate Nigerian who still saw Buhari as a saint had only wasted his time in school.

The party’s National Publicity Secretary, Yemi Kolapo, wondered if a President, who defended a man who had stolen more funds than any living or dead Nigerian, could be rated high in integrity.

Kolapo said, “If the late dictator, Sani Abacha, whose stolen funds, worth several trillions of naira could run the Nigerian economy for three decades is the President’s hero, then his supporters must be enemies of Nigeria.