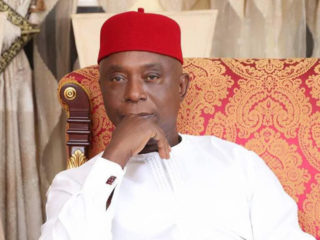 THE Nigeria Police Force, NPF, has found that legal consultant and philanthropist, Hon Ned Nwoko, was not involved in any act of terrorism against his kinsmen, the people of Idumuje-Ugboko, Aniocha North Local Government Area, Delta State, as alleged by some accusers from the community.

In an investigation report on a petition against Hon Nwoko by some Idumuje-Ugboko indigenes, dated November 23, 2020, Head, Inspector General of Police, IGP, Monitoring Unit, Force Headquarters, Abuja, A. A. Elleman, ACP, stated: “The investigation could also not reveal any act of terrorism against the suspect as alleged by the complainants.”

Police advised the parties “to maintain peace and wait for the outcome of civil suits pending in courts,” while “the complainants be charged to court for the offence of making a false statement to public officers with intent contrary to Section 125 (a0 and (b) of Criminal Code Law.) ”

On the allegation that Ned, described as a suspect in the report did not pass through due process in obtaining the community’s land for his university and golf course projects, the police report said: “Glean from available documents, the suspect’s application was processed and endorsed with the consent of the then Obi of Idumuje-Ugboko kingdom, HRM Obi A. O. Nwoko III (now late) wherein 33.4 hectares of land were given to him.”

“In 2015, the suspect through his company (Linas International Ltd.) requested for additional 90 hectares of land from the same community through the Traditional Council for the establishment of Golf Course Development and Sports University, the suspect’s request mentioned above was considered. The community and the suspect entered a Memorandum of Understanding which was signed by both parties and their representatives.

“After the land transaction was consummated, Certificate of Customary Right of Occupancy for same was issued to him by Aniocha North Local Government Area.

“In the year 2016, the documents concerning the land transactions issued to the suspect later became a subject of the petition which was investigated by Delta State Police Command and the suspect was exonerated, while the Prince Chukwunonso Nwoko (the current Obi of Idumje-Ugboko) community and others were charged to court for the offence of forgery.

“In May 2019, Prince Chukwunonso Nwoko, Obi of Idumuje-Ugboko and 10 others were charged to court by FCID for offences conspiracy to commit an act of terrorism.

“Both parties, in this case, are having several litigations bordering on land tussle in different courts of competent jurisdiction either as claimants and defendants.

“The allegations of police complicity in the crisis being raised by the complainants could not be substantiated and investigation could not establish any evidence or testimony to that effect,” the police asserted.