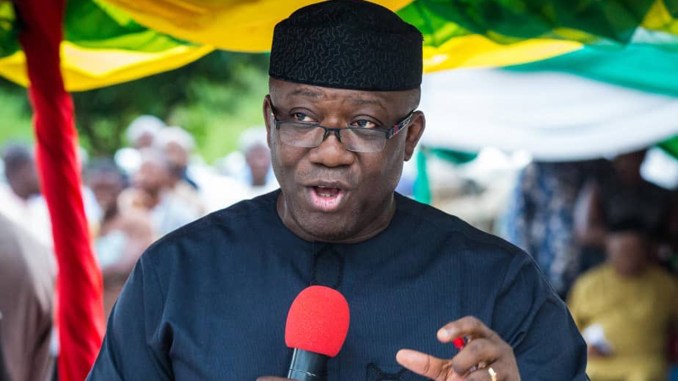 •••Fayemi assured his people that the incident won’t be politicised.

Gov. Kayode Fayemi of Ekiti, on Sunday declared that there is no wasting time in prosecuting those responsible for the killings during Saturday’s house of assembly bye-election, for Murder.He said while on a sympathy visit to Omuo Ekiti, headquarters of Ekiti East LGA where the incident occurred, that those arrested would be arraigned not later than Monday for murder.

The News Agency of Nigeria (NAN) reports that while in the town, the governor visited the private home of Sen. Abiodun Olujimi, a PDP Senator representing Ekiti South Senatorial District, who was one of those who narrowly missed being hit by the bullets.

He later held a closed-door meeting with the Senator where he reportedly told her, after the latter had narrated her ordeal, that the issue at hand was not a political issue, promising that anyone arrested in connection with the attack would be treated as a common criminal, no matter which political party such a person belonged to.

He said, “We may not be able to bring back the dead but every perpetrator will be dealt with to serve as a deterrent to others.

“After I spoke with Senator Olujimi on Saturday, I called the Commissioner of Police (CP) and instructed him to do everything possible to arrest the perpetrators and I’m happy to inform you that as I arrived the state (today, Sunday), the CP said all the culprits had been arrested and on Monday, they shall be charged for murder.”

He also visited the palace of the Olomuo of Omuo Ekiti, Oba Noah Omonigbehin, as well as survivors on their hospital beds, wishing them quick recovery.

He thanked the Oba for maintaining peace in the community by not allowing residents to take laws into their hands in reaction to the wanton killings.

He assured the traditional ruler that the perpetrators would be made to face the full weight of the law, saying he would not politicise the incident.

Responding, Oba Omonigbehin thanked the governor for the condolence visit, pleading that those responsible for the attack be brought to book.

NAN recalls that three persons were on Saturday shot dead in Omuo-Ekiti by suspected party thugs while five others sustained gunshot wounds during the House of Assembly bye-election conducted by the Independent National Electoral Commission(INEC) in the state constituency.

The seat became vacant following the death in February of an All Progressives Congress (APC) lawmaker representing the constituency in the state House of Assembly, Juwa Adegbuyi.

Related Topics:Fayemi says perpetrators of Ekiti election killings will face murder charges on Monday
Up Next