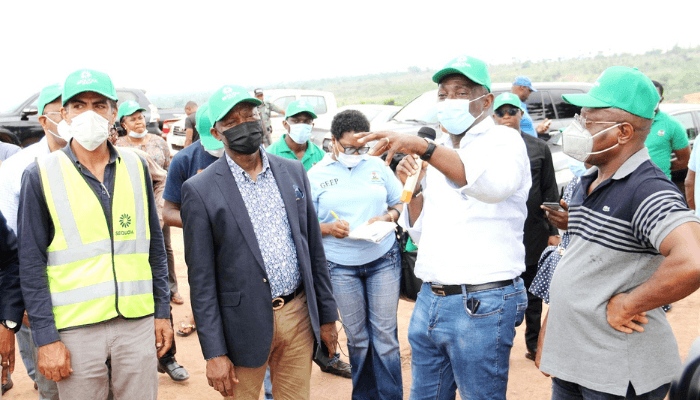 TRACKING_____The Delta Government on Thursday said it was developing a one-stop-shop Agro-Industrial Park to diversify the state’s economy beyond oil.

Commissioner for Information in the state, Charles Aniagwu, disclosed this while addressing journalists after an inspection visit to the Agro-Industrial Park at Aboh-Ogwashi in Aniocha South Local Government Area of the state.

He stated that the project was one of the serious efforts of government geared towards diversification of the state’s economy.

“You will recall that during our electioneering campaign in our first tenure, Governor Ifeanyi Okowa came out with an acronym SMART Agenda in which includes Agricultural reforms and accelerated industrialisation.

“Government after governments had continued to preach diversification without doing much in that direction.

“The development of the Agro-Industrial Park is a step towards diversification of the state’s economy beyond oil revenues.

“Because we have a comparative advantage in agriculture in Delta the governor deemed it fit to set up this Agro-Industrial Park and with the high-powered Committee, you will realise that it is not a tea party.

“It will benefit all Deltans irrespective of their location because everybody involved in agricultural production can bring their products for processing.

“This project is a very good step in diversifying the economy through the Agricultural sector,” Aniagwu stated.

Chairman of the Implementation Committee Eric Eboh, a professor, said the project inspection was designed to assess the state of work in relation to the overall work plan of the project.

He said the project went through rigorous feasibility, appraisal and analysis both national and international process with over three foreign banks competing to fund the project.

“As you are already aware the Agro-Industrial Park is one of the major flagships of the Okowa administration.

“The project went through international validation by three banks as viable and self-sustaining and by the time the project kicks off, the agricultural value chain will never be the same again in Delta.

“It is meant to be a game-changer and a one-stop-shop for agro-processing for domestic consumption and export in Delta.

“The project which started in October has 18 months completion timeline and the Ogwashi-Uku dam was one of the key criteria for the location of the Agro-Industrial Park,” Eboh said.

Project Consultant, Arch Kester Ifeadi, in a technical brief, said the idea for the project started three years ago.

He said the land comprises 220 hectares with 100 hectares of rice farm as the anchor project and assured that there would be constant electricity and water supply in the park.

“There was a feasibility study carried out and the present site was chosen as most suitable because of the water bodies in the area.

“The central portion is the engine room for commercial plots of 1.5 hectares of land for agro-industrial investments.

“The Park Centre which is the lifeblood and the epicentre of the Agro-Industrial Park will have the rice plant, warehouses, residential, hospitality, conferences, training, seminars, research and quality control laboratory.

“There is a lake of 1.4cubic meters of water to sustain the project all year round including the dam and potentials for generating electricity to jump-start the project.

“To ensure the sustainability of the project, it will be private sector driven by the Delta State Agro-Industrial Park Limited with Delta having 40 percent, MRG 30 percent and Norsworthy Investments 30 percent,” he stated.