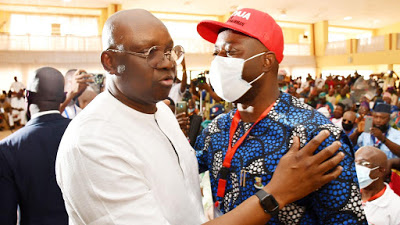 “Governor Makinde looks quiet but dirty. Parading these people to wait for me; they are over a thousand. They are doing this to me in the video, ‘we will cut your neck,’ Fayose alleged when he featured on Politics Today, a Channels Television Programme, on Wednesday.

Fayose was reacting to a video shown to him during the interview.

The footage showed how some men threatening to kill the former governor if he comes to the venue of the People’s Democratic Party congress held to determine its leaders in the South-West zone.

Both Fayose and Makinde have been at loggerheads over who controls the party in the region.

Fayose claimed that those threatening to kill him in the video were thugs from the road transport workers union in Oyo, adding that the video depicts the kind of characters behind the Oyo governor.

“I have seen this video; what this gentleman was saying at the time they came to the venue. They said ‘Fayose, we are waiting for you here; we are going to kill you.’ This is the chairman of road transport workers in Oyo state,” he said.

Fayose also condemned the election as a “scam,” adding that the election was rigged in favour of Taofeeq Arapaja, a former deputy governor of Oyo state, backed by Makinde.

Related Topics:Fayose saysGovernor Seyi Makinde is a dirty politician
Up Next

2023 presidency: Nobody can become president without Rivers – Wike insists