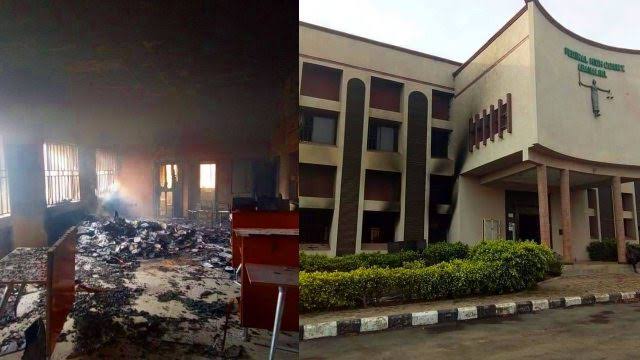 It is understood that the fire set by the attackers using fire bombs affected the library and security posts of the building.

TrackNews Online gathered the hoodlums also injured two security guards during the attack that was said to have occurred around 1am.

It took the efforts and quick intervention of firefighters to put out the fire at the court premises located along the Enugu/Abakaliki Highway.

Confirming the incident, the Spokesperson of the Ebonyi Police Command, Loveth Odah said the attackers who came in their large numbers, scaled the court perimeter fence to carry out the attack.

A detachment of policemen with three patrol vehicles were sighted on Tuesday when newsmen visited the court but guards on duty said the Registrar had given instructions not to allow anyone enter the premises.

Meanwhile, former Vice President Atiku Abubakar has called for an end to the attacks on Nigeria’s citadels of learning to prevent the country from plunging into darkness.

TrackNews Online had reported how unknown gunmen abducted an unspecified number of students of the Federal University of Agriculture in Benue State on Monday.

Also, five of the kidnapped students of Greenfield University, Kaduna have been killed by bandits who abducted them from their school last week Tuesday.

The incidents occurred just a few months after bandits abducted some secondary schools in Katsina, Niger, and Zamfara states.

In a statement on Monday, Atiku asked the federal government to declare a state of emergency in the education sector and post armed guards to all schools in the affected states.