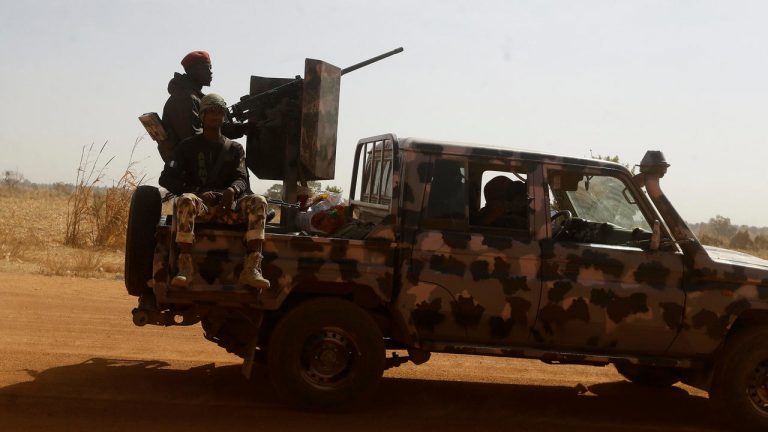 At least 33 Nigerian soldiers and an officer were killed on Sunday, Daily Trust reports.

Reports suggest that an Air Force fighter jet (NAF) made a mistake, attacking some ground troops on their way to the town of Mainok.

A source said that some Boko Haram terrorists in military-style dress entered the military base in Mainok, and inflicted serious damage on troops and equipment. A NAF fighter jet also bombed a military vehicle carrying soldiers on a rescue mission.

The Boko Haram attack in Mainok is believed to be the worst recent weeks due to the level of devastation.

But on Monday, the NAF said it would investigate reports that its men had killed 20 soldiers in a drone strike.

In a statement, the army’s director of public relations, Mohammed Yerima, said six soldiers had been killed and several Boko Haram members killed in an attack.

Yerima said: “During the firefight which lasted several hours, the gallant troops tactically lured a number of the terrorists into a killing zone within their camp where the Air Task Force of Operation Lafiya Dole scrambled Alpha jets and helicopter gunboats which took turns in decimating the already trapped terrorists.

“In the aftermath of the encounter, scores of Boko Haram terrorists were neutralised with their body parts littering the area and a number of their gun trucks destroyed.

“Regrettably, one gallant officer and six soldiers paid the supreme sacrifice while 5 other soldiers sustained various degrees of injuries,” he said.

How the massacre was carried out

According to Reuters the terrorists who disguised as Nigerian soldiers penetrated the military Super Camp in Mainok and arrived in a convoy of four Mine-Resistant Ambush Protected (MRAPs), a scorpion Armoured Personnel Carrier (APC), and several gun trucks.

After several hours of combat, the base was captured compelling the soldiers to call in airstrikes.

Daily Trust reported that terrorists who operated with mine-resistant military vehicles also moved into the community s who disguised as friendly Nigerian soldiers and looted foodstuff and other logistics from shops.

One Dailty Trust’ sources said: “The ISWAP fighters divided themselves into three groups. The well-armed fighters attacked the base. They raided and overrun the military base and killed no fewer than 30 soldiers including the Commanding Officer (CO).”

“Another group was set for an ambush in case of reinforcement of troops from Damaturu road. This group successfully ambushed some soldiers and killed 3 of them while nine others were injured.”

“The last group was stationed along Jakana – Mainok road that leads to Maiduguri. They, too, ambushed some soldiers and seized one MRAP vehicle, and killed 3 soldiers.”