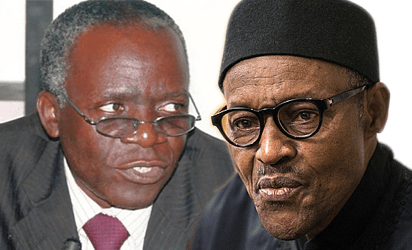 Human rights lawyer and Senior Advocate of Nigeria (SAN), Femi Falana has urged the Muhammadu Buhari government not to rely on any false hope of getting help from the US government in fighting insecurity in Nigeria.

TRACKING____He noted that historically, the US government and other western leaders have not done much to support the country’s war against insurgency.

Rather than expect help from the US, Falana urged the federal government to recruit more soldiers and police, empower and motivate them to do the job.

Falana made the submission on Thursday in Abuja during a public lecture to mark the 80th birthday of Prof Omotoye Olorode.

Delivering a paper titled ‘Labour And The Quest For Nigeria’s Development: Reflections And Prognosis On The Way Forward’, Falana said Nigerian leaders must look inwards on how to solve the security challenges facing the nation.

He spoke against the backdrop of the recent discussion between President Buhari and the US Secretary of State, Anthony Blinken during which the Nigerian leader sought the help of the American government in fighting insecurity.

Particularly, TRACKNEWS recalls President Buhari during the meeting, called for the relocation of AFRICOM headquarters from Germany to Africa so as to be closer to the theatre of operation.

Reacting, Falana submitted on Thursday that: “Regrettably, Nigeria is currently witnessing the virtual collapse of the security architecture of the neocolonial State due to the diversion of the huge fund earmarked for procurement of arms and ammunition for the armed forces and the police by successive regimes.

“To prevent terrorists and bandits from sacking the government, President Buhari has appealed to President Joe Biden to come to the aid the ruling class in waging war against terror and banditry. And without consulting either the African Union or the ECOWAS the federal government has asked President Biden to relocate the US African Command (AFRICOM) in Germany to Africa.

“Since 2009, the cry for help in prosecuting the counter insurgency operations had fallen on the deaf ears of the leaders of the West. As if that was not enough, the United States and her allies prevented Nigeria from acquiring vital security equipment to prosecute the war on terror due to the abysmal poor human rights record of the armed forces and the police.

“Even though the Buhari administration was allowed to pay the sum of $329 million for 12 super Tucanofighter jets in November 2018 to aid the counter insurgency operations in the North East Zone the jets have not been delivered.

“Instead of giving Nigerians the false impression that the United States is going to send troops to defend them the federal government should be compelled to embark on mass recruitment of military and police personnel, equip and motivate them to defend every part of the country. In addition, all state and local governments should proceed to set up defence committees constituted by young men and women in every community to collaborate with the Police in securing the lives and properties of all citizens.”

Meanwhile, the special adviser on media and publicity to President Muhammadu Buhari, Femi Adesina on Thursday said some preachers see nothing good about Nigeria.

He alleged that such clerics are part of the country’s problems because they always say and project negative images about Nigeria.

Related Topics:Insecurity: Why US Govt May Not Help Buhari – Falana
Up Next

Why I said my father was dead – Amputee hawker finally speaks