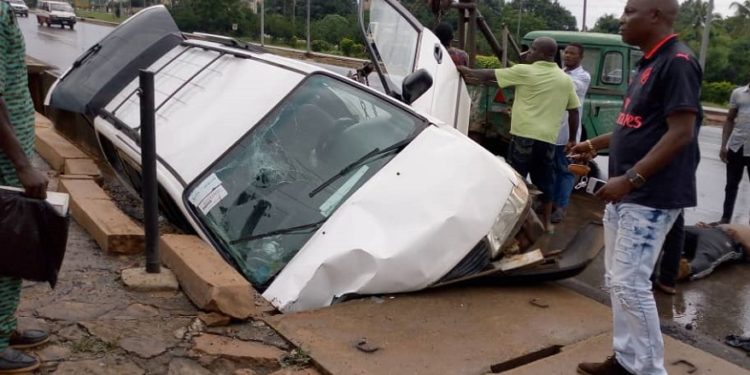 A wedding programme at Ewato in the Esan South-East Local Government Area of Edo State during the weekend ended abruptly after nine persons coming to grace the occasion died in a road crash.

TrackNews Online learnt that the bus conveying the victims collided with a truck fully loaded with bags of cement.

The incident, according to reports happened on Saturday, at Ekpon junction along Agbor-Ewohimi Road in Igueben LGA. The truck which is said to be heading to the eastern part of the country reportedly rammed into the bus which has a total of ten passengers all heading to the wedding venue.

Reports confirmed that the remainder of the victims had been deposited at the Shillo Hospital mortuary in Ewohimi, while the only survivor, a yet-to-be-identified boy, was reportedly taken to the intensive care unit of the same hospital.

TrackNews Online understands that a mob angered with the development set ablaze the truck, as the driver of the truck reportedly escaped immediately after the accident happened.

Confirming the incident, the Sector Commander of the Federal Roads Safety Corps in the state, Henry Benamaisa, said he could understand at the time that only five persons died on the spot, while others were rushed to the hospital.

He said, “The accident was as a result of excessive speeding and loss of control. The sienna was trying to dodge something and left his lane and rammed into the truck. The two drivers were speeding.”

Meanwhile, there was tension on Sunday night after gunmen shot not less than four motorists in a robbery attack in Owerri, Imo State.

EndSARS: Petitioners grumble over nonpayment of compensation in Akwa-Ibom