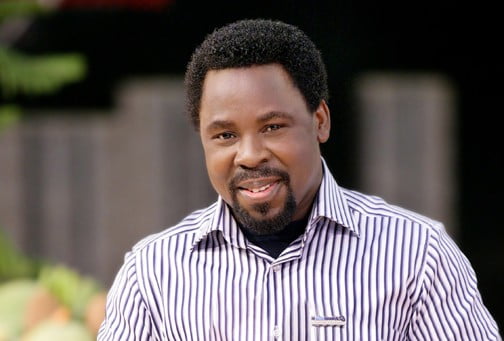 More details have emerged over the suspension of the Youtube Channel of Prophet T.B Joshua’s popular Emmanuel TV.

It may be recalled that TrackNews Online had earlier reported that Emmanuel TV was suspended for allegations of spreading hate speech in one of the videos it uploaded.

“Emmanuel TV YouTube suspension: Our mission is to share the love of God with everyone – irrespective of race or religion – and we strongly oppose all forms of hate speech! We have had a long and fruitful relationship with YouTube and believe this decision was made in haste,” he tweeted.

In a fresh development, a United Kingdom-based media organization, OpenDemocracy, has claimed responsibility for the closure of the channel which had over 1,800,000 subscribers and 600,000,000 views.

OpenDemocracy explained in an article that it reported TB Joshua’s activities, which included seven clips showing TB Joshua “engaging in exorcism to cure gay and lesbian congregants of their sexual orientation by casting out the demon of homosexuality.”

The author of the article Kerry Cullinan explains how the American video-sharing site terminated Emmanuel TV “in response to our enquiries about TB Joshua’s controversial exorcisms.”

Cullinan acknowledged that in the clips, after the Nigerian cleric’s prayers, the individuals concerned all testified that they no longer experienced same-sex attraction.

“YouTube’s Community Guidelines prohibit hate speech, and we remove flagged videos and comments that violate these policies. In this case, we have terminated the channel,” a YouTube spokesperson told openDemocracy after they reported Joshua to the social media giant.

OpenDemocracy also revealed they reported Joshua’s activities to Facebook and DSTV, which hosts Emmanuel TV on satellite in Africa.

Joshua’s Facebook Page, which has over 5.6 million followers, remains active, although the company stated specific videos had been removed after OpenDemocracy’s queries.