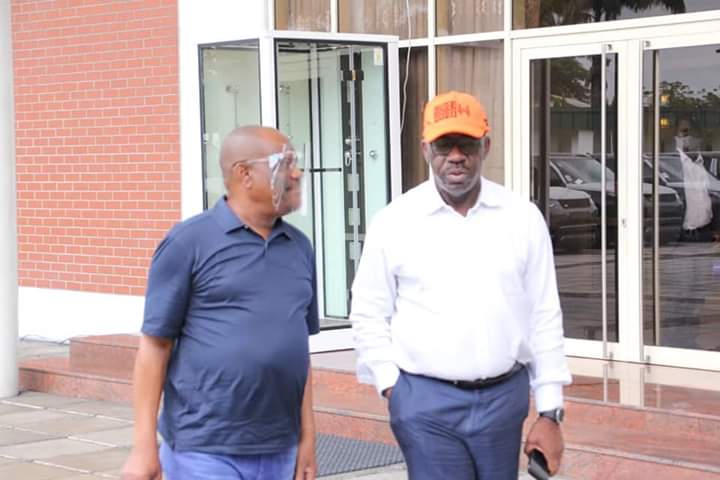 Rivers State Governor, Nyesom Wike has declared that his Edo State counterpart, Godwin Obaseki knows what he’s saying about the alleged printing of N60 billion by the federal government to augment the March allocation to states.

Wike while declaring his position on the matter, called on the federal government and the Central Bank of Nigeria (CBN) to tell Nigerians the truth about what happened.

He accused the CBN of failing to address the allegation made by Obaseki, but rather beating around the bush to confuse Nigerians.

Wike noted that Obaseki was an insider within the All Progressives Congress (APC) who understands how the party operates and therefore couldn’t have gone public with his allegations without having facts.

The Rivers State Governor made his views known on Sunday at the dedication of Senator Rochas Okorocha’s grandson.

He said: “It is very unfortunate Obaseki was in APC, so he understands them. So Obaseki couldn’t have come from the blues to say they printed N60 billion, he knows them.

“If you hear what the governor of the Central Bank said, instead of answering the question, he said governors should pay back the bailout loan.

TrackNews Online recalls that Obaseki had accused the federal government of printing N60 billion as part of the allocation for March.

According to Obaseki, the economy is no longer what it used to be due to the rising debt profile is worrisome as dependence on crude oil is no longer sustainable.

But the federal government through the Minister of Finance, Zainab Ahmed, and the CBN has denied claims by the governor, but Obaseki insisted and urged the government to tell Nigerians the truth.

On his relationship with Okorocha, who is an APC chieftain while he is a PDP stalwart, Wike declared that their relationship transcends political divides and he doesn’t abandon relationships because of politics.

“I have known him since 1999 when I was the Council Chairman, so there is nothing political about it. I don’t abandon people because of politics. It is in my character to always keep my friendship with people. It is not based on party or politics,” he said.

Meanwhile, the Nigerian Army has confirmed the arrest of a Boko Haram informant that gave out information to terrorists which assisted them in attacking a military base in Yobe State.

The spokesperson of the Army, Brigadier General Mohammed Yerima in a statement made available to Naija News on Sunday gave the name of the informant as Modu Ari.

The statement added that Ari was arrested by troops of 27 Task Force Brigade attached to Operation Lafiya Dole.

Related Topics:Wike Reveals Why Obaseki Is Right That FG Printed N60bn
Up Next