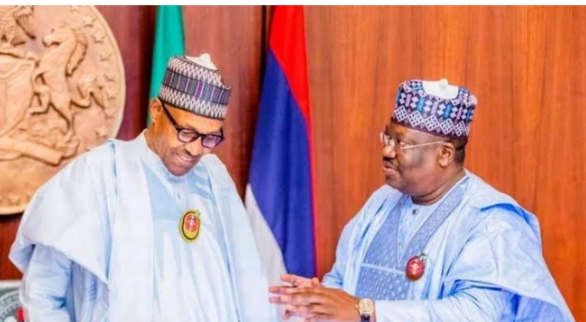 Members of the majority caucus of the National Assembly are set for a showdown with their colleagues in the minority, over threats to take legislative measures against President Muhammadu Buhari for constitutional breaches.

Senators of the governing All Progressives Congress, on Wednesday, dissociated themselves from the threat issued by their minority colleagues, led by Peoples Democratic Party.

The PDP caucus had at a news conference, in Abuja, on Tuesday, listed the various constitutional breaches of the President. They asked him to sit up or be prepared to face legislative action.

One of the constitutional powers of the national assembly is a provision that allows legislators to impeach a democratically elected President.

In response to this threat, APC senators who are in the majority, on Wednesday, accused their minority colleagues of heating up the polity.

Speaking on behalf of the Senate APC Caucus, the Senate Leader, Yahaya Abdullahi, said, “We reject and dissociate ourselves from all and any inflammatory statements that appear to threaten the authority of Mr President and our party.

“We accordingly wish to remind them that blame game and threats of ‘constitutional measures’ are unwelcome and will not help in any form to address the challenges the nation currently faces.

“We in the APC Caucus, totally reject the many incorrect statements contained in the said press release.

“The statement by the PDP Caucus has gone too far given the good working relationship in the 9th Assembly and especially with the Minority Caucus.

“While we acknowledge the natural disposition of playing politics, we are worried and disturbed that our colleagues are playing with lives.”

They further said, “We take exception to the unfortunate charge that our President has not been seen.

“This is false and cheap politics. Mr President and service chiefs are meticulously busy every day and every night in deliberations with a view to addressing the security challenges across the entire country.”