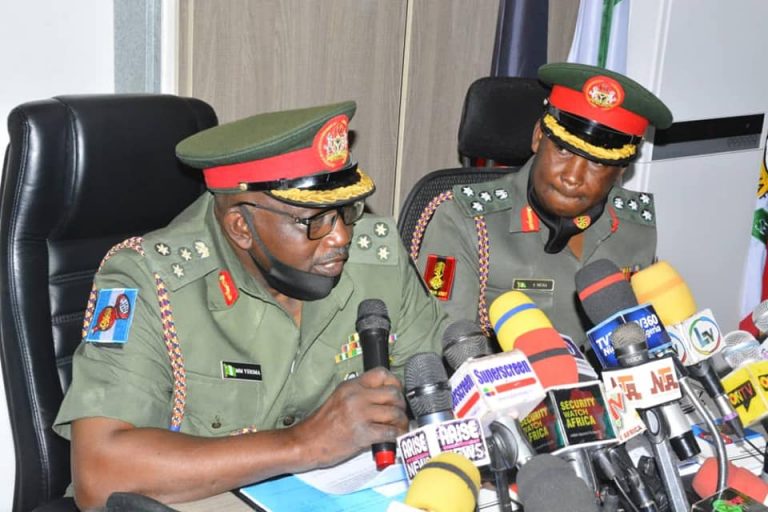 The Nigerian Army has denied reports that Boko Haram terrorists distributed Ramadan gifts and cash to residents of Yobe and Borno States respectively.
Reports have emerged that a faction of the Boko Haram terrorist group loyal to the Islamic State West Africa Province (ISWAP) had distributed Ramadan welfare packages to some residents of Borno and Yobe States.

It is understood that the insurgents distributed food items including rice, beans, millet, maize, sugar, spaghetti as well as cash gifts to the residents.

The insurgents claim the gesture is to help the residents observe the Ramadan fast with ease.

However, a security source noted that the welfare package might be part of a grand plan by the terrorists to lure new members into their organization.

“Imagine, they (insurgents) claimed that the gesture was aimed at assisting villagers to perform Ramadan fast and Sallah with ease and happiness, the same villagers they killed their friends and family members,” the source said.

Reacting in a statement the Director Army Public Relations Brigadier General Mohammed Yerima, described the reports as propaganda, coined to mislead the public.

He stated that observed that after critical analysis of the report by experts, it was discovered that there was no substance in the publication.

According to the statement, “the attention of the Nigerian Army (NA) has been drawn to an ill-informed publication by an online news medium Sahara Reporters of 11 May, 2021 where it was alleged that Boko Haram, the Islamic State West Africa Province had distributed Ramadan welfare packages to some residents of Borno and Yobe States.

“The article went on to give breakdown of the food items distributed including cash which the publisher alleged was meant to entice the locals to join the terrorists ranks. The article then switched to speak on the 2019 report of International Crisis Group which tended to pour encomiums on the terrorists recruitment system since breaking away from the Abubakar Shekau’s faction. Unfortunately the article did not mention any specific location where the alleged distribution took place.

“The NA being a professional organisation decided to look at the article with every seriousness with a view to making intelligence out of it. However, our analysis established that there was nothing substantial about the claim except that it was a hurriedly packaged piece of propaganda that was meant to distract the populace from the recent defeats being suffered by the terrorists.

“It is a notorious fact that the terrorists at various times have made several attempts to make the lives of the residents of these states miserable through the Ramadan season which were met with overwhelming response from the troops of Operation Hadin Kai. The most recent of such being their failure to sneak into Maiduguri on 11 May, 2021 same day this ill-conceived article was published. The fate of the terrorists that made that audacious attempt is already a public knowledge.”