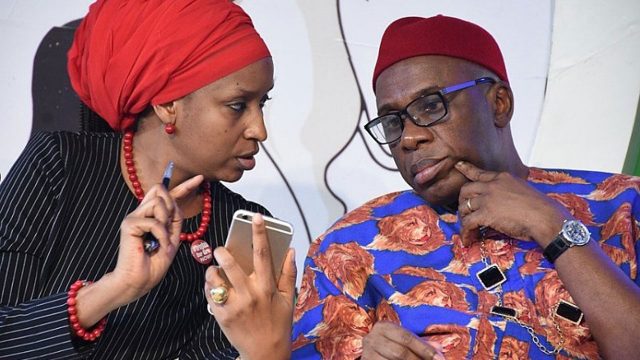 TRACKING____The battle between Honourable Rotimi Chibuike Amaechi, Minister of Transportation and the now-suspended Managing Director of the Nigerian Ports Authority, Ms. Hadiza Bala Usman is one with several dimensions about public service in Nigeria. One of the dimensions is how acts of thinking outside the box by junior or subordinate staff that should be hailed by superior or senior managers are often considered to be confrontation or bucking the system with their negative impacts on productivity in the public sector.

One other is the enthronement of arbitrariness over the rule-of-law thereby making the instrumentality for good governance become the rule-of-force with its stifling and icing effects on harmonious relationships within the civil service which is seen as the turf for a chosen few who possess the requisite connection muscles to survive and entrench themselves within the murky water of public service.

Yet another dimension which is the worst of them all, is the trump card of impunity. Impunity in Nigeria is the hydra-headed monster that is leveraged by every person who wields a little bit of authority in Nigeria to buck and circumvent the smooth running of the system, ignore extant laws, provisions, and regulations, throw their weight around, recall a few favours earlier made and reap benefits that are not rightfully theirs at the expense of the people and the nation.

All three dimensions were part of the script that played out in the month of March when the first salvo of many that were to be fired later came from the Minister of Transport. The letter was addressed to President Muhammadu Buhari. In the letter dated March 4, 2021, Mr. Amaechi asked for the yearly remittance of operating surpluses by the NPA from 2016 to 2020 which he described as being far short of the amount due for actual remittance and even stated what should have accrued to NPA within the stipulated years; a figure he put at the sum of about N165 billion. The letter contained a suggestion that the accounts be investigated and audited.

To ensure that there is no interference by Ms. Usman in the course of the investigation, she was asked to vacate the office. She was not given notice about her alleged offence and she was not formally informed before her suspension was announced. It speaks volume of whatever may lay simmering in the relation of both the Minister and the former M.D., but it is apparent that processes were trampled underfoot and the outcome will reverberate for a long time and will not help NPA, the Minister or the public service as it will be another precedent in the use of underhand means for the settlement of scores in the public service.

In the response she sent to the Chief of Staff, Ms. Usman faulted the premises on which the budget office advised the Minister who arrived at the calculation which gave the impression that there was a shortfall in the remittance for the years under reference. She specifically backed up her claims with the provisions of the Fiscal Responsibility Act which is the guide to all matters financial from a public agency, saying that the figures provided by the budget office as the operating surplus for 2017 and 2018 were far in excess of the actual figures that were obtained from the Authority’s audited financial statements.

The audited financial statement of the Authority for the period 2017 and 2018 showed operating surpluses of N76.782 billion and N71.480 billion in contrast to the figures released by the budget office to the tune of N133.084 billion for 2017 and N88.79 billion for 2018 as being the current and correct sums.

There was also a response to the 2019 and 2020 query which said that even while awaiting the approval of the Authority’s board for the two years, the Authority has in its statutory obligation made a remittance of N31.683 billion for the year 2019 and N51.049 billion for 2021. This pro-activeness is commendable on the face of it.

It is pertinent to ask going by the above explanation if there is some undercurrent in NPA that has led to the seizing of the jugular of the helmswoman at the Ports. There could actually be no love lost between both parties in this war but there is the demand for decorum in staging battles like this that helps to fuel the speculations that this is a government at war with itself. Battles like this at a time when the population is agitated that it is underserved also helps to drum wave of support for the underdog, in this war of possible massive attrition.

The ports serve not just Nigeria, but a host of other stakeholders in the sub-region, in the continent as well as the extended international community and they are watching. Many may not venture a comment, but others will and like the former Liberia President, Madam Ellen Johnson Sirleaf in her Twitter account @MaEllenSirleaf in support of Ms. Usman she said “I am disheartened to hear about the suspension of Nigerian Ports Authority MD @hadizabalausman, whom I have known to be an accomplished leader and dedicated public servant. I urge adherence to the rule of law and fair and equal treatment as the situation evolves.”

But how will the situation evolve when Ms Usman appears to have already been presumed guilty in the tone of the letter that set the probe, investigation, and auditing of the accounts at the beginning. Is this whole Hadiza and NPA probe about transparency, accountability and remittances or is it just to give somebody a bad name to facilitate her removal or perhaps to replace her with someone more pliable, malleable, and manageable according to the dictates of the higher authority?

Related Topics:Battle for the till of Nigerian Ports Authority
Up Next

YINKA ODUMAKIN AND THE UNFINISHED WORK OF NATION BUILDING