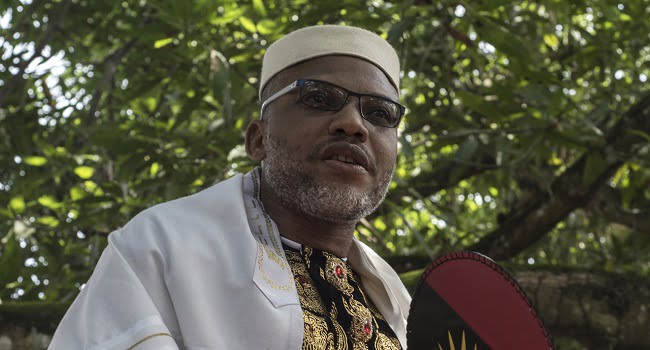 The leader of the proscribed Indigenous People of Biafra (IPOB) Nnamdi Kanu has raised an alarm that some people are planning to burn down the Alaba international market.

Kanu while speaking in a broadcast on Sunday via Radio Biafra alleged that some persons have perfected plans to burn down the market and blame IPOB’s security arm, the Eastern Security Network (ESN) for the arson.

“As I said before, they want to attack Alaba international market in Lagos,” the Biafra agitator said.

“They want to attack the market and burn it down. They want to attack. I am warning now, and not tomorrow they will say ESN came to Lagos. I want to tell our people in Lagos, to be on the alert to be vigilant because they are coming to burn Alaba market.”

Naija News recalls about three weeks ago, the Lagos State Commissioner of Police, Hakeem Odumosu had accused IPOB of planning to attack the state.

However, in a swift reaction, Kanu refuted the claims of the Police chief, accusing him of attempting to cause bad blood between the Yoruba and Igbo ethnic groups.

Meanwhile, IPOB has denied any involvement in the killing of the former political adviser to ex-President Goodluck Jonathan, Ahmed Gulak.

Naija News recalls Gulak was shot dead by unknown gunmen in Owerri, Imo State on Saturday while he was on his way to Abuja from Owerri.

Explaining details of how Gulak was killed, the Imo State Police Public Relations Officer, SP Bala Elkana in a statement on Sunday said Gulak didn’t inform the Police or any other sister security agency of his movement.

Elkana added that the cab driver who took the politician to the airport avoided the normal route where they were attacked by six armed bandits.

However, some quarters are insinuating that IPOB is responsible for the killing of the top Northern politician but the group has now issued a denial.

IPOB also accused Imo State Governor, Hope Uzodinma, and the All Progressives Congress (APC) of knowing the circumstances behind the killing.

Related Topics:Biafra: IPOB Leader Nnamdi Kanu Warns Of Plans To Burn Down Alaba Market
Up Next