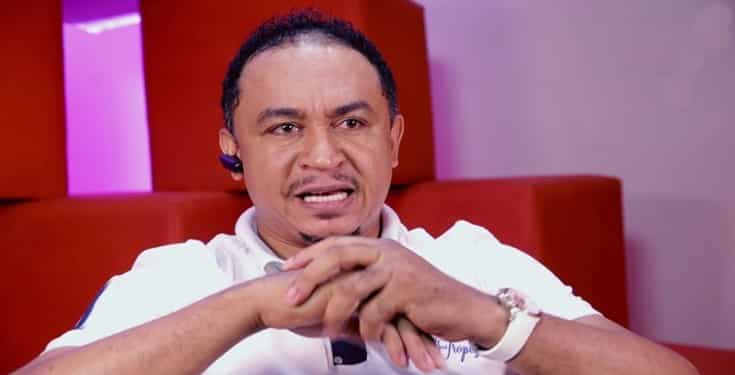 He wrote; I declare to you today that praying in the name or title ‘Lucifer’ is more potent than praying in the name your colonial masters gave your savior. Jesus has NO meaning in Hebrew, Aramaic, Greek, Latin or English, while Lucifer’ on the other hand means ‘light bringer’ as used in the original Latin scriptures quoted below, correctly translated from the Greek word ‘φωσφόρος’ which has the 100 percent exact same meaning as Lucifer. Below, you can clearly see a well documented instance of Peter calling Christ ‘Lucifer’ in the Latin Bible and ‘φωσφόρος’ in the Greek Bible. The original language of the New Testament is GREEK and to properly understand scripture, you can’t neglect it. The Greek and Latin bibles were written more than 1,600 years before the grossly erroneous biblical mistranslation called the King James Version was declared as the ‘Authorized Version’.”

Reacting to the post, a fan identified as Sogunro Toluwase challenged the media personality to heal a mad man with the name of Lucifier.

He wrote; ”Sir, I challenge you to a test. Let’s pick a random mad man on the street. Pray in the name of Lucifer, and I will pray in the name of Jesus Christ. Let’s see at the mention of who they get delivered. I dare you, sir. That will end this rubbish you keep spitting out.”

”I think the first mad person that needs prayers is you, so let me pray for you to be delivered from benightedness and unscholarly religious slavery, which is the highest grade of madness.”

Related Topics:Daddy Freeze Reacts As Man Challenges Him To Heal A Mad Man In Lucifer’s Name
Up Next