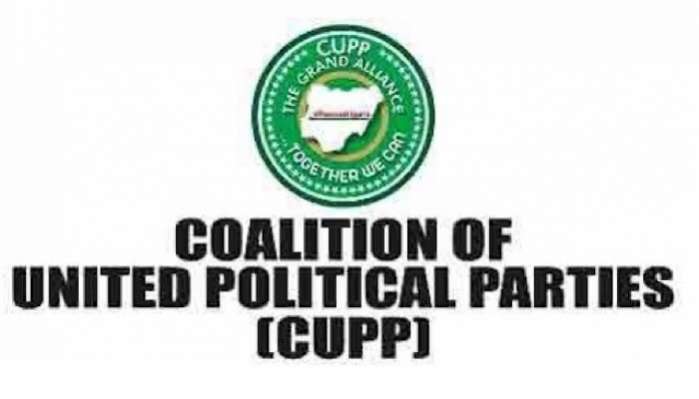 Stakeholders in the Coalition of United Political Parties, CUPP, Tuesday, unveiled a new agenda
aimed at repositioning the organisation into purposeful, focused and result-oriented opposition body that would champion the cause of governance in Nigeria

The Coalition of United Political Parties (CUPP) has insisted that the recent Supreme Court judgement affirming the de-registration of 74 political parties is only binding on the National Unity Party (NUP).

CUPP maintained that the judgment does not, in any way, bind on the 22 political parties which got victory at the Court of Appeal as they are not parties before the Supreme Court in NUP’s case and their prayers before the courts are also different.

On August 10, 2020, the Court of Appeal in Appeal No. CA/ABJ/CV/507/2020, between Advanced Congress of Democrats (ACD) & 21 others, and Attorney General of the Federation & INEC ruled that the de-registration of the 22 political parties was unconstitutional and ordered the Independent National Electoral Commission (INEC) to relist them as registered political parties.

A statement from CUPP’s chairman, Contact and Mobilisation, Olusegun Peters, indicated that instead of obeying a clear order of Court, the INEC choose to wait until the Supreme Court determined the two appeals before it to know which one to obey.

CUPP accused INEC of misleading Nigerians on the recent judgment of the Supreme Court which upheld the de-registration of NUP.

It maintained that Supreme Court judgment has no effect whatsoever in the matter of 22 political parties pending at the Supreme Court and other parties at various stages of litigation.

Peters said that CUPP is alarmed that INEC would condescend so low in sponsoring and spreading fake news that the Supreme Court has upheld its de-registration of 74 political parties on 6th February 2020, conscious of the fact that only one political party, NUP, appeal was determined by the apex court.

NUP had approached the Federal High Court, Court of Appeal and Supreme Court seeking to know if INEC has power to de-register political parties which the Courts affirmed. The Court’s decisions on NUP from high court to apex court bind only on NUP based on its prayer before the courts.

CUPP expressed confidence in the Judiciary as the last hope of all oppressed people in Nigeria and believes that justice will prevail in the matter before it.

CUPP also warned INEC to stop killing the voice of opposition in Nigeria and suffocating the political space which is detrimental in the quest for liberal democracy, social justice and equity. The Coalition insisted that it will resist any attempt to undermine the hard-earned democracy in Nigeria.

Related Topics:De-registration: Supreme Court judgement binding only on NUP – CUPP
Up Next