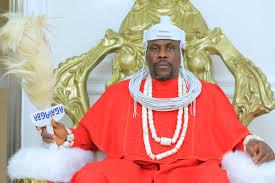 Consequently, he warned war-mongers to steer clear noting that Gbaramatu Kingdom was a peaceful place desirous of development and not war.

The foremost Ijaw monarch gave the assurance during the celebration of Gbaraun Egbesu/Ibolomobo-Ere/Amaseikumor festival, held at Oporoza town, the ancestral headquarters of Gbaramatu Kingdom and homeotwn of ex-militant leader, Chief Government Ekpemupolo alias “Tompolo” in Warri South-West Local Governing Area of Delta State. The royal father, who, also marked his 5th year on the throne, attributed the prevalent peace in his domain and across the entire Ijaw communities in Niger Delta region to the yearly celebration of Amaseikumor festival which cleanses their homelands.

“May we use this opportunity to reiterate that the Gbaramatu people will always live in peace with their neighbours and will continue to foster unity amongst us and our neighbours. Therefore, it is imperative for the public to note that we cannot be instigated or plunged into armed conflicts with our neighbours by blood-hungry merchants of war.

“Gbaramatu kingdom broke into national and international limelight on many notes and descriptions but peace. We were deliberately painted as a habitation of troublemakers, lawless and ungrateful people by outsiders who knew nothing about us but relied on the concocted tales told to the by mischief makers.

“But God, for giving us a voice, the world now knows that Gbaramatu kingdom is a peaceful place desirous of development, but detest and will always reject oppression, slavery and injustice. Where there is truth and justice, peace will always prevail”, he said.

The Monarch attributed the prevalent peace in his domain and across the entire Ijaw communities in Niger Delta region to the yearly celebration of Amaseikumor festival which cleanses their homelands.

He noted that the yearly festival which dates back to hundreds of years ago was used by their ancestors to purify their land from any form of evil and ushers in good tidings for their people.

According to him, “the festival you are witnessing here today which is as old as the kingdom itself, is a series of spiritual cleansing activities meant to purify the land and the entire Ijaw nation of evil that are detrimental to the development of her people”

“This is a festival celebrated to entrench the nature of peaceful co-existence and foster unity among members of the kingdom, the Ijaw nation and her neighbours within the Nigerian polity. This explains the large attendance of the festival annually by people from across various tribes”, he explained.

On the issue of insecurity prevalent in the country today, the Royal father urged all the state governors to, as a matter of urgency, improve more on border and territory protection in order to forestall the influx of strangers who are out on a mission to wreck devastating havoc in their domains.

“Governors as the Chief Security Officers of their various states, ensures that their borders and territories are secured and inaccessible to agents of destruction and mayhem who enters the state in various guises.

“Your Excellences should engage sincerely, high level information and intelligence gathering mechanisms to stop this menacing insecurity which is adversely affecting our national economy already. To ensure peace, unity and security, everybody however must be involved. I therefore call on all of us to do our bit in this regard” he stated.

Related Topics:Delta monarch assures Ijaws won’t be instigated into another war with neighbours
Up Next