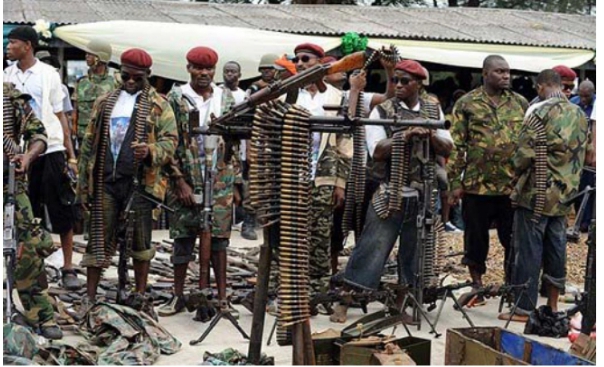 PORT-HARCOURT___Comasi, one of the alleged notorious gang leaders declared wanted by Rivers State Governor, Nyesom Wike has denied committing any crime that should warrant his being declared wanted.

Comasi, whose real name is not yet known, in an interview TNC correspondent on Thursday, said he has not taken to arms since he was granted amnesty by the State government.

Recall that on Tuesday, Governor Wike declared Comasi and another militant, VIP wanted, when the traditional rulers, political and opinion leaders of Ekpeye nationality paid a solidarity visit to him at Government House in Portharcourt.

This he said, were part of measures to stamp out criminality in Ahoada West and Ahoada East Local Government Areas of the state.

But in a chat over the phone with our correspondent, General Comasi as he is fondly called by his people, claimed the Ekpeye kingdom knows the supportive role he has played in providing security in the area.

“Youth leaders and community leaders can attest to the fact that I have sanitized the area. Formerly, people cannot sleep with their two eyes closed. I am doing the work of Chief Security Officer because today, sanity has returned to our area. Since after the amnesty, I have not killed anyone. I gathered all my people and we submitted all our arms and signed all kinds of papers. I am not a kidnapper, a rapist or a kidnapper. The governor is my in-law and never declared me wanted,” he insisted.

The ex-militant said he is looking at his travails as politically-motivated, noting that his problem started when he started nursing the ambition of representing his constituency in the State House of Assembly.

In his words, “I want to go to the State Assembly because I want to serve my people and my people have expressed their support for my ambition and that is the problem. They want me to be their boy forever but I have disagreed to be used and dumped. So this is politically-motivated.”

He also accused politicians in the State government, including the Executive Chairman of Ahoada-West local government Hope Ikiriko, of tarnishing his image before Governor Nyesom Wike.

“The Chief Security officer to Wike is not helping matters in Ekpeye kingdom. He took my name to the governor and painted me black. Those people that are carrying my name about are my enemies. I am a god-sent to my people. Put call across to my people and confirm this. I am a freedom fighter and have never killed any innocent person. I work with government. I am the JTF commander in Ahoada West, the DPO there can confirm this,” Comasi said.

Comasi further expressed disappointment that despite working with Mr Ikiriko who has refused to empower him and his boys, he still tagged him as a cultist.

He urged the politicians giving cover to their brothers who are known criminals, to also submit their names to the Governor to declare them wanted.

Meanwhile, the Executive Chairman of Ahoada-West local government area of Rivers State Hope Ikiriko is yet to respond to the text message sent to him on the allegations against him.

Related Topics:Comasi says“I did no wrong to warrant being declared wanted” ex-militant
Up Next

We Are In Partnership Bayelsa State Govt. to To NDDC.