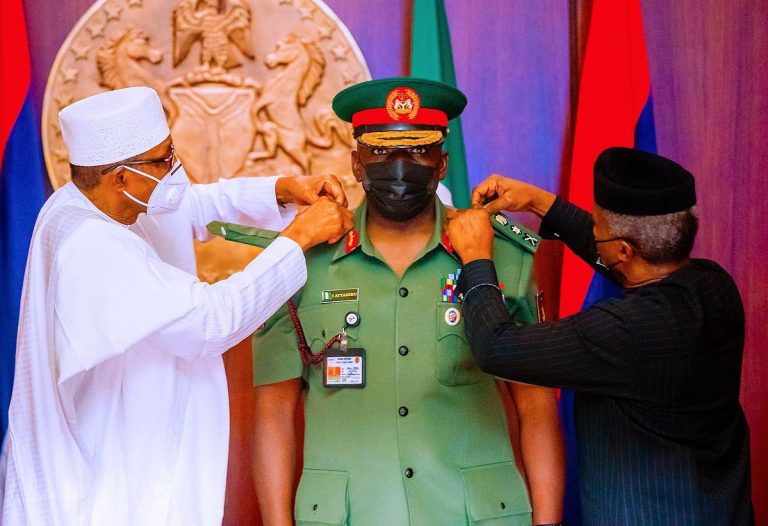 The absence of President Muhammadu Buhari and Vice President Yemi Osinbajo at the burial of the late Chief of Army Staff, General Ibrahim Attahiru, on Saturday has attracted criticism from some Nigerians.

As previously reported by TrackNews Online, Attahiru and some others died on Friday in a military plane crash which occurred close to the Kaduna Airport.

The remains of their bodies were moved to Abuja on Saturday for burial.

However, the obvious absence of President Buhari and Vice President Osinbajo didn’t go unnoticed by Nigerians who took to Twitter to express their views.

Former presidential aide, Reno Omokri wote: “@MBuhari called General Attahiru a “hero”, but he did not attend his funeral just 15 miles from Aso Rock. Yet, he travelled 4000 miles to Paris.

“Even @ProfOsinbajo did not attend, yet he traveled 2500 miles to Kampala. Why will anyone then want to die for Nigeria? ”

.@MBuhari called General Attahiru a “hero”, but he did not attend his funeral just 15 miles from Aso Rock. Yet, he travelled 4000 miles to Paris. Even @ProfOsinbajo did not attend, yet he traveled 2500 miles to Kampala. Why will anyone then want to die for Nigeria?#TableShaker

Below are some other reactions as well.

Buharists are so pained. Their father did not attend the funeral of the fallen COAS, Gen. Ibrahim Attahiru. pic.twitter.com/4hK2Q3Z6qX

Once again Buhari that made it to and fro Paris can’t make it to Gen Ibrahim Attahiru and crew’s burial.

How ever tight their schedule might be; it would had been a great honor and moral booster for either of them to grace the event.

The President didn’t attend the Janazah prayer and Burial of his Chief of Army.

The CinC has maintained a terrible attitude of not attending the burial of fallen service personnel.

4 Generals including COAS. Not even attendance of the prayers or service? No matter how you explain it, this looks bad for the President and morale of the force.

His Chief of Staff died serving the country. He never went for his burial.

His Chief of Army Staff died serving the country. He never went for his burial.

This is the President of Nigeria.

A man so brutally horrible that he doesn’t even give a shit about those closest to him.

I ask again, where is the President and C-in-C of the Armed Forces of the Federal Republic of Nigeria? When the occupant of the highest office in the land becomes redundant to the point that he cannot attend the funeral of his Chief of Army Staff and other officers…

The President was so much shocked to the extent he couldn’t attend the burials of the COAS and other Fallen Heroes. May we never shocked in this way, Amen. pic.twitter.com/NebqOJPZaz

The president can’t even show up! Can’t address d nation! Can do or say anything reasonable except some mindless tweets from his aides! And we expect soldiers, I mean genuine Nigerian soldiers to win this war when d general who is d president hides away in aso rock? Ha Nigeria

COAS, who until his death, was locked in a battle with terrorists, dies a plane crash due to bad weather(🤔), and the President and his VP can’t be bothered to attend the burial ceremony. Wonder what must be running through the minds of the troops this man commanding…

It will be recalled that earlier on Friday, President Muhammadu Buhari expressed sadness over the deaths of the Chief of Army Staff, Gen Ibrahim Attahiru, and others who died in a plane crash.

Naija News had earlier reported that an aircraft that conveyed Attahiru and some other military officers crashed in Kaduna.

President Muhammadu Buhari in a statement released through his spokesman, Femi Adesina, said the deceased officers will not die in vain.

“President Muhammadu Buhari is deeply saddened over the air crash that claimed the Chief of Army Staff, Lt. Gen. Ibrahim Attahiru, and other military officers.”

“The President condoles with families of the deceased, the military, and Nigerians in general, describing them as “heroes who paid the ultimate price for peace and security in the land.”

“While praying that God receives the souls of the patriots, the President says the crash “is one mortal blow to our underbelly, at a time our armed forces are poised to end the security challenges facing the country.

“The President pledged that the departed would not die in vain.”

Related Topics:Knocks As BuhariOsinbajo Fail To Attend Burial Of AttahiruOthers Who Died In Plane Crash
Up Next