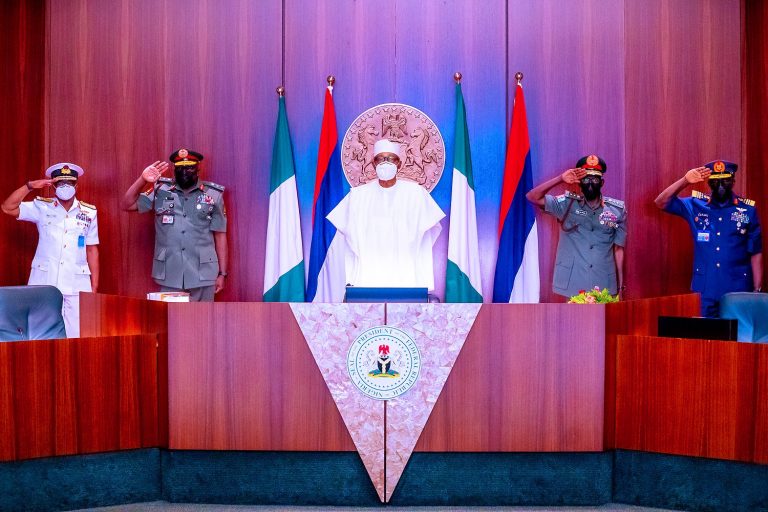 The Nigerian Military has declared that it has no intention of taking over the leadership of Nigeria but would rather continue to fulfil its roles as stated in the constitution.

This was contained in a statement on Monday evening where the military authorities reacted to a submission by Robert Clarke (SAN) that Nigeria may collapse in the next six months and urged the military to take over power.

But the military in its reaction through a statement signed by the Acting Director Defence Information, Brigadier General Onyema Nwachukwu, pledged its allegiance to President Muhammadu Buhari and the constitution of the federal republic of Nigeria.

It vowed to continue protecting the territorial integrity of Nigeria and warned its officers not to entertain any thoughts or plans of a military coup.

The full statement reads: “The attention of the military high command has been drawn to a statement purported to have been made by one Robert Clark SAN, suggesting that current political leadership should hand over power to the military for the purpose of restructuring.

The Nigerian Military wishes to dissociate itself from such anti-democratic utterance and position. Let it be stated categorically that the Armed Forces of Nigeria remain fully committed to the present Administration and all associated democratic institutions.

We shall continue to remain apolitical, subordinate to the Civil Authority, firmly loyal to the President, Commander-in-Chief of the Armed Forces of the Federal Republic of Nigeria, President Mohammadu Buhari and the 1999 Constitution as Amended.

We shall continue to discharge our constitutional responsibilities professionally, especially in protecting the country’s democracy, defence of the territorial integrity of the country as well as protection of lives and properties of citizens.

The Military High Command wishes to use this opportunity to warn misguided politicians who nurse the inordinate ambition to rule this country outside the ballot box to banish such thoughts as the military under the current leadership remain resolute in the Defence of Nigeria’s Democracy and its growth.

We also wish to remind all military personnel that it is treasonable to even contemplate this illegality. The full wrath of the law will be brought to bear on any personnel found to collude with people having such agenda.

The current security challenges are not insurmountable. The Armed Forces of Nigeria in partnership with other security agencies are working assiduously to ameliorate the challenge. Nigeria will know peace again. PLEASE BE WARNED!

Atiku, in a statement in celebration of World Press Freedom Day on Monday, lamented that the media had suffered at the hands of the Buhari government in the last few years.

Related Topics:Military Not Interested In Removing Buhari – DHQ
Up Next

Why I introduced contractors to Buhari, by Mbaka