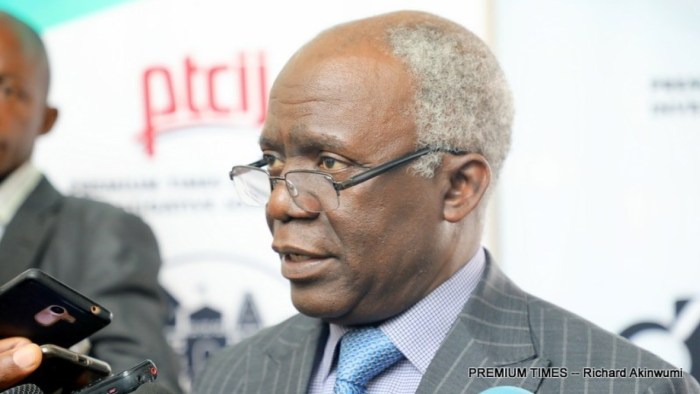 Femi Falana, the human rights lawyer, has expressed fear and worry over the level of impunity in Nigeria, saying peace will continue to elude the country without a proper people’s oriented constitution.

The duo made the remarks on Thursday, May 27, 2021, at the final sitting of the Senate Committee on the review of the 1999 Constitution, South West, Lagos, Ogun, Oyo, Zonal Public Hearing, Lagos Center, held in Ikeja, under the chairmanship of Senator Oluremi Tinubu, representing Lagos Central.

However, participants at the hearing reiterated calls for a total review of the constitution to reflect fiscal federalism; implementation of the Child Rights Act and Disability Act in states, local government autonomy, judicial autonomy, and police reform.

While making a presentation, Falana made a large case for the poor and vulnerable, insisting that it was important to give secession agitators in the country the confidence of peace and sense of inclusion if they must remain as indivisible entity.

Condemning the rate of impunity in the country, Falana stressed, “Our country is ruled by rule of the rulers and not rule of law. People commit all manner of crime and get away with it because there are no sanctions. This must change.

The Social Security Bill must also work so that jobless people can get stipends pending when they will get full employment.”

He added: “What can we do very quickly to save this country which is on the verge of collapse.? If you don’t want people to break away from Nigeria, we must give them confidence and sense of belonging, don’t declare a war.

“Therefore, for the constitutional amendment to be fruitful, for us to have genuine outputs from this meeting, peace must reign. We must address Nigeria’s problem frontally. We must also give people the confidence of peace and inclusion if we must kill the cries for secession. Don’t declare a war.

“In fact, in some parts of the country, the 2023 elections are already in jeopardy.

“Essentially, I am making a case for the poor, the masses of our people who are generally not represented in fora of this nature which are most times for the elites and privileged among our people.

“Chapter two of the constitution guarantees the right to education, health, living minimum wage, good adequate housing, unemployment benefits, among others, but members of the ruling class conspired and agreed, regardless of political affiliation, that these provisions shall not be enforceable or made justiciable. But unless we are prepared to make these provisions justiciable and enforceable, this country will know no peace.

“Whatever constitution will come forth after now must make justiciable the fundamental objectives and directive principles of state without which there will be no political stability in Nigeria.”

The lawyer also advocated that the Child Rights Act enacted in 2003, and the Disability Act, be domesticated and implemented in states if the constitution review must make meaning to the common man.

“We are submitting that the Child Rights Act enacted in 2003 be made applicable throughout Nigeria, we have to work it out.

“As of today, only 25 states have adopted the law, but even then, not fully implemented. Unfortunately, it is states where banditry, kidnapping, and terrorism thrive that have refused to adopt or domesticate the law, and that is where banditry, terrorism, and kidnappers recruit daily.

“We also advocate a 50/50 representation for men and women in government. We should emulate other African countries where women even take a larger percentage in government affairs.

“Right to employment: all citizens, without discrimination on any group whatsoever, [shall] have the opportunity for securing adequate means of livelihood as well as adequate opportunity to secure suitable employment (s.17(3)(a); Conditions of work: “Gender-sensitive rights – Right to equal pay: for equal work without discrimination on account of sex, or on any other ground whatsoever (S.17(3) (e); Right of the child: children, young persons and the aged are [entitled to be]protected against any exploitation whatsoever, and against moral and material neglect (S. 17(3)f); Right to public assistance in conditions of need (S. 17(3)(g),” he stated.

Falana also advocated police reform, proposing a change of name from the Nigeria Police Force, NPF to the Nigerian Police Service, NPS to reflect the reality of modern-day policing.

He also advocated for the upward review of police salaries.

Olanipekun, represented by his son, Oladapo, advocated that judicial outcomes be respected and adhered to so that the common man can feel protected and their rights protected.

According to him, the Electoral Act should be amended to allow governorship election cases to terminate at the Supreme Court.

This, he said, is important to stem the tide of conflicting judgments arising from Appeal Courts.

Olanipekun also advocated that more judges be appointed to the Supreme Court to reduce the workload of judges.

Related Topics:Nigeria Will Not Know Peace Unless… – Falana Warns
Up Next