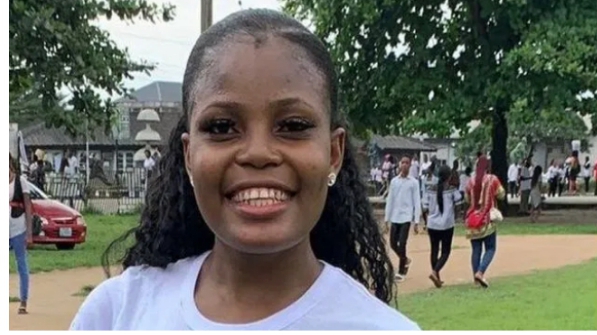 Angry Youths have discovered over twelve shallow graves in the compound of Uduak Akpan, the confessed killer of Iniubong Umoren.

Akpan had lured Iniubong, a graduate of philosophy to her death in the guise of offering her a job in Uyo, Akwa Ibom State.

The suspect who has been arrested by the police authorities, lured late Umoren to his place at Nnung Ikono Obio in Uruan Local Government Area of the State, raped, killed, and buried her in a shallow grave in his father’s compound.

The youths of the community enraged with the news stormed the compound, and vandalised the building, using pebbles after setting ablaze the security house of the one storey building.

It was gathered that the vandalization started since on Tuesday night and its still ongoing as at press time even as it was alleged that the youths carted away property in the compound and handed the boy’s father (whom they accused of being an accomplice) to the police.

When some correspondents visited the scene, Wednesday evening, about twelve(12) shallow graves were seen in the large compound and a skeletal bone suspected to be that of a child lying on the floor was also seen.

Also old sack bags were seen scattered near the graves as the youths who conducted journalists round the compound claimed that they were used for packing human parts they buried.

The youths said the suspect and his family are strangers living in the community as their real community is Nnung Ikono Ufok in Uruan LGA.

One of the youths identified as Akpan Shadrach James told journalists that the family of the suspect erected the building about four years ago and do not live there permanently but only come occasionally since they have another building in Uyo town and nobody actually knew what they do inside the compound.

“People thought that they were living here, they don’t, they only come and go. They are from the next community. They don’t have friends in this community as their gate is always closed and they wrote the notice, ‘beware of dogs’ on their wall. We didn’t know that such a thing was happening here.

“We want government to investigate this matter and bring justice to that slain orphan. We are grieved with this incident and we don’t want this matter swept under the carpet.”

Related Topics:Over 12 Graves Found in Compound of Iniubong Umoren's Killer
Up Next