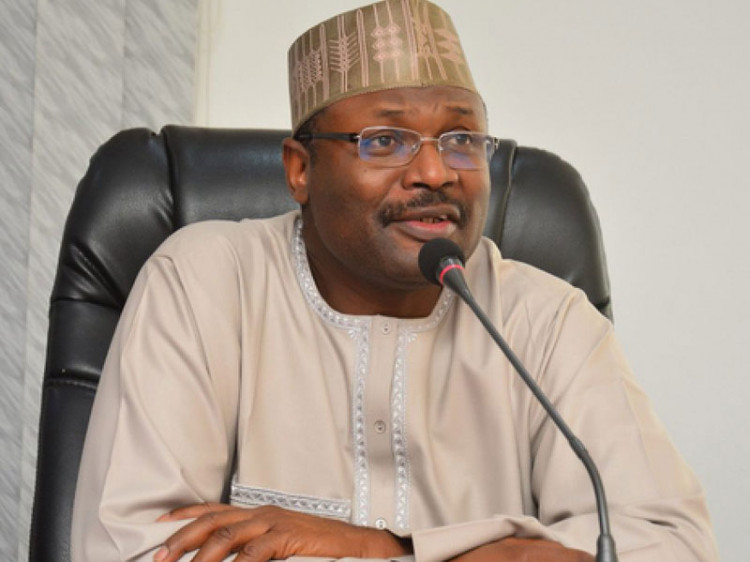 Chairman of the Independent National Electoral Commission (INEC), Prof. Mahmood Yakubu, on Wednesday expressed concern about the spate of arson attack on its facilities, especially in the Southeast, warning that it might compromise the commission’s ability to conduct hitch-free elections in future.

The commission has also shifted a planned meeting with security agencies to brainstorm on protecting its assets, earlier scheduled for yesterday to Monday.

The number of INEC’s facilities torched in recent months rose to 23 yesterday as hoodlums set ablaze two of the comnmission’s offices in Ebonyi State.

Yakubu, at a meeting Wednesday in Abuja with the Resident Electoral Commissioners (REC) from the 36 states and the Federal Capital Territory (FCT), said event in the recent past like the burning of the offices and damage to the INEC property would endanger the conduct of elections in the country.

He said: “Unfortunately, some events in the recent past have challenged the commission and adversely affected our commitment to continue to improve the electoral process. The spate of arson and vandalism targeting the commission’s facilities and property has become profoundly worrisome.

“Unfortunately, this has been on the rise since the 2019 general election but has now developed into a crisis. In the last three weeks or so, three of our local government offices in Essien Udim in Akwa Ibom State, Ohafia in Abia State and Udenu in Enugu State have been set ablaze by unidentified persons.

“Last Sunday, 16th May 2021, our state office in Enugu suffered yet another arson and vandalism in which parts of the building were ransacked and several vehicles razed. And more of our facilities are being systematically targeted and attacked. Just last night, Tuesday 18th May 2021, two more offices in Ebonyi and Ezza North Local Government Areas of Ebonyi State were burnt down.”

According to him, although no life was lost, the damage to the physical infrastructure and electoral materials was total.

“Nothing has been salvaged from ballot boxes and voting cubicles to generating sets and office furniture and equipment.

“Surely, these attacks are no longer freak events but appear to be quite orchestrated and targeted at INEC. Clearly, these are acts of unjustifiable aggression, which may undermine the commission’s capacity to organise elections and dent the nation’s electoral process,” he added.

Yakubu said the facilities of the commission were there to serve the local communities in exercising their franchise, adding that targeting such important national assets and repositories of electoral materials that took time and enormous resources to procure cannot be justified.

He said: “Replacing these facilities in the prevailing economic circumstances will indeed be a tall order, thereby adversely affecting electoral services in the same communities. These facilities are not only limited to voting but also used for other critical electoral activities such as voter registration, the coordination of stakeholder engagements and voter education and sensitisation.”

According to him, the commission will work with the security agencies to deal with the perpetrators of these heinous crimes in accordance with the law.

Yakubu added that the meeting with RECs will take briefings from across the country on threats to INEC facilities and deliberate on how best to protect them.

“I believe that we can dig deep and draw from the commission’s longstanding partnership with communities in this regard, in addition to depending on the invaluable support of our security agencies.

“Consequently, the challenges posed by these threats notwithstanding, we are still positive that we can find lasting solutions to the spate of attacks on our facilities,” he stated.

He explained that this must be done quickly to forestall disruptions to upcoming electoral activities, particularly the continuous voter registration billed to hold in 2,673 centres nationwide for over one year.

However, he said that on the positive side, the commission conducted 28 out of 32 by-elections across the country since the 2019 general election, in addition to four end-of tenure governorship elections in Bayelsa, Edo, Kogi and Ondo States.

According to him, the commission must reconcile itself with the fact that elections have become an all-year round undertaking in Nigeria.

In addition to the by-elections, he said INEC successfully concluded stakeholder engagements on the expansion of voter access to polling units.

He said: “I am glad to inform you that the option of converting existing voting points and voting point settlements into full-fledged polling units and situating them in the most agreeable locations to support increased voter access was overwhelmingly accepted by Nigerians. Consequently, the commission has, in the last three weeks, concluded the actual exercise as well as the verification of the newly established polling units.

“In the next few days, the commission will meet to finalise the compilation and coding of polling units and thereafter make the information public.

“As you are also aware, our current strategic plan covering the period 2016-2021 expires at the end of this year. Consequently, the committee set up by the commission to develop the 2022-2026 strategic plan has concluded its work, the validation of which will commence this week.

He also said that INEC had completed preparations for the resumption of the Continuous Voter Registration (CVR) commencing on June 28.

Yakubu stated that preparations for the Anambra State governorship election, to be held on November 6, and the FCT Area Council election scheduled for February 12, 2022, will be prioritised.

Similarly, he said INEC would continue the early preparations for 2023 general election.

According to him, the commission has already established an Election Project Plan (EPP) Committee to work on the 2023 election plan, with the aim of completing the plan early enough and ensuring that INEC is fully ready for the election.

Meanwhile, two offices of the commission in Ebonyi State have been set ablaze by hoodlums.

The two INEC offices are located at Ezza North and Ebonyi Local Government Areas of State.

It was gathered that the hoodlums invaded the two separate offices in the early hours of Wednesday and set them ablaze, resulting in the destruction of sensitive and non-sensitive documents.

Ebonyi State Governor, Chief David Umahi, who confirmed the incidents, said some of the security challenges in the state were politically motivated.

Umahi stated this when the Assistant Inspector-General of Police in charge of Zone 9, Umuahia, Abia State, Mr Etim Ene Okon, visited the state to address the ongoing insecurity in the state.

Etim decried the insecurity, especially kidnapping, cultism, banditry among others.

“The most annoying part of the insecurity is the incessant killing of police officers, burning of their stations and making away with their arms and ammunition

“Stakeholders should call those responsible for the hideous crime to order because they are from your different communities of the state,” Etim said.

Borno: I trust my deputy – Zulum says after vacation