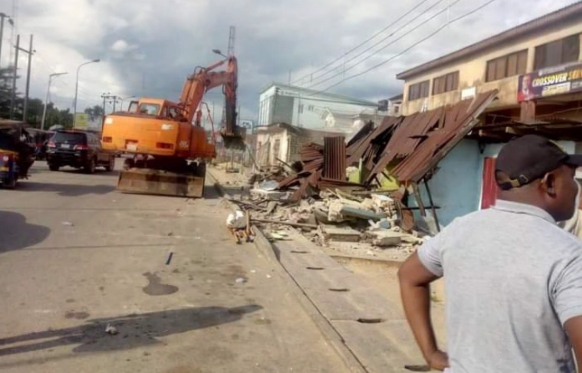 The demolition, according to an eyewitness, started around 4:00 pm with a bulldozer accompanied by heavy security including men of the Nigeria Police, the State owned security outfits, Bayelsa volunteer and Bayelsa vigilante services.

TrackNews Online gathered that the demolition is in connection with the urban renewal project of Governor Douye Diri led prosperity government.

However, our reporter who was at the scene saw the traders standing in groups, helplessly, and counting their losses.

Augustus Isaac, a trader who owned a Boutique in the Road, said the exercise was irrational as it would only compound the hardship that people are already going through, considering the hardship in the state due to Covid- 19 pandemic, we are just trying to manage with life.

“This incident could make young people go into social vices as it was disheartening to watch one’s sweat go down the drain.

“I suffered to set up my Boutique shop but now, I’ve lost everything without notice.

“The government is really frustrating us. There is no job and they are not looking out for our welfare. Yet when we try to make a decent living, they frustrate our efforts.

“This incident alone can lead people to armed robbery and kidnapping. They should have given us prior notice to enable us to make alternative arrangements.

“Before now we were complaining of low patronage and now for some of us, we don’t even know where and how to start with this demolition. Our means of livelihood has been taken, and it is very unfortunate that this is happening now that the majority of the traders cannot afford to rent new shops due to the economic hardship,” Augustus lamented.

Another trader who pleaded anonymity frowned at the state government’s policy of demolition of illegal structures across the state. He said the demolition exercise was not done in the interest of the masses, adding that it would only plunge the residents into more hardship.

“Yes, we are aware of the urban renewal project of the government, but even at that, the government must always consider the masses,” the person said.

“What’s the alternative for the people? Yes, development is good, but the way and manner the government is going about it is rendering people useless as they lose their means of livelihood.”

He urged the government to always consider the people in coming up with any economic policy.

“With this development, I am yet to recover from the shock because I am already disorganized, and I believe it is the same for many other people,” he said.

TrackNews Online reports that the Commissioner of Information, Orientation and Strategy, Hon. Ayibaina Duba had earlier issued a statement informing the general public to remove all forms of illegal structures defacing the state capital.

The statement read in part,”In furtherance of Government’s commitment to the urban renewal agenda aimed at making Yenagoa a befitting state capital of our dreams, the general public, especially owners of all forms of illegal structures such as portakabins, caravans and other make-shift structures in and around Yenagoa metropolis are by this notice directed to remove them immediately.

“In addition, operators of unfenced mechanic workshops, car dealers, block makers and vulcanizers by road sides are also directed to relocate to the Mechanic Village along Imiringi road or into fenced properties without delay.

“Furthermore, landlords who have illegally extended their structures are advised to revert to the original approved house plans by removing such extensions. Failure to comply will not only attract the demolition team to such structures, but may also lead to impostion of fines.

“Bayelsa of our dreams demands the compliance of all please”.

Police react to removal of flags, repainting of PDP secretariat in Calabar