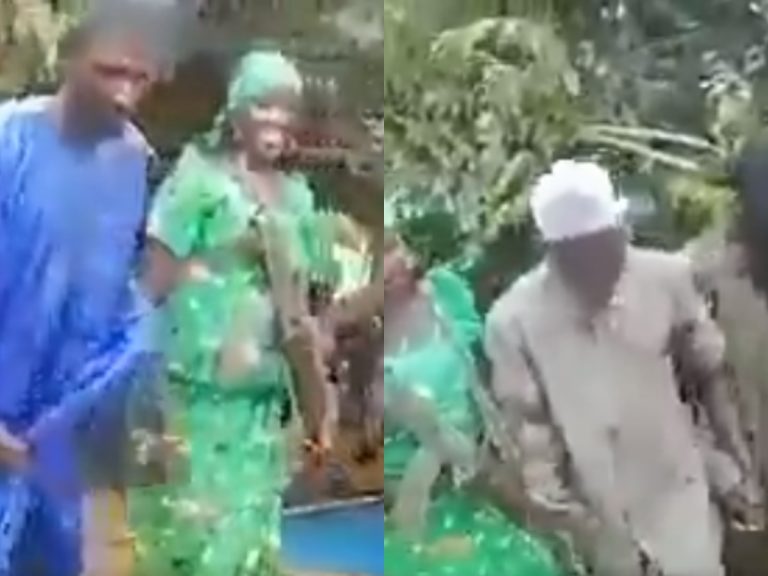 A viral video of an alleged Boko Haram commander marrying the daughter of a Fulani herdsman has stirred a barrage of reactions on social media.

TrackNews Online reports that the video shared by former minister of aviation, Femi Fani-Kayode, showed some men dressed like members of the dreaded sect and a young lady accompanied in dance by her Fulani parents.

Guns and cutlasses could be seen in display in the barely 2 minutes video clip which has attracted a series of reactions on Twitter.

Sharing the video, Fani-Kayode wrote: “Boko Haram commander marries the daughter of Fulani herdsman in Sambisa forest. What a combination!”

Reacting to Fani-Kayode’s claim that it was a marriage between Boko Haram and Fulani herdsmen, a user of the microblogging platform who is identified as @adamsydph said: “I am 100% sure this is not BH marriage.”

Adams was, however, countered by another netizen with the username @osudifesheriff who demand him to explain the kind of marriage where the bride carries AK 47 instead of flower or bags to follow the groom.

He tweeted: “Can you now explain to us the kind of marriage where the bride carries AK 47 instead of flower or her bags to follow the groom?
“Moreover they don’t look like security personnel so why are they carrying guns illegally or is there now a place in the constitution where there is”

In his defence again @adamsydph said: “If he is to say they are bandits, kidnappers or hersdmens, I will agree but BH doesn’t look like this”

Taking the argument further, one @go_etch slammed Garba Shehu, Senior Special Assistant to President Muhammadu Buhari on Media & Publicity and Abubakar Malami SAN, Nigeria’s Attorney General of the Federation and Minister of Justice. The social media user said the duo’s faces are only seen on the screen when it is an issue on an open grazing ban.

He wrote: “Garba Shehu and the AGF Malami will not utter a word on this video.. but if a ban on open grazing surface like this online, you will see their ugly faces”

Another netizen, Aromaye Tunde [@toondae03] tweeted: “Are you sure we are okay in this God-forsaken part of the world? And NAF, NArmy and the government of the land is somewhere gazing at this video online, nothing will be done to them. God punish anyone preaching one Nigeria.Thumbs down”.