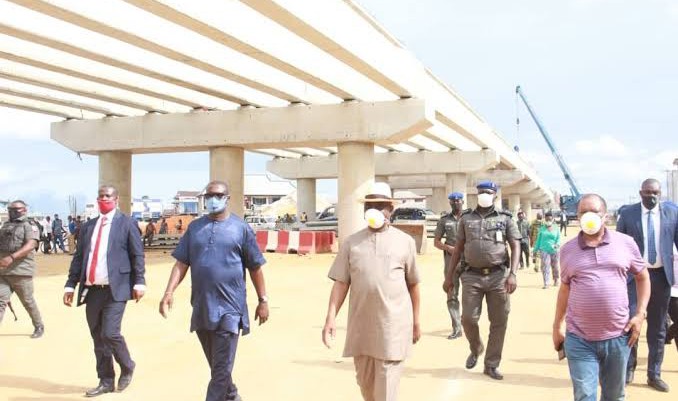 All the flyovers contracts have always been awarded to Julius Berger, TrackNews Online learnt.

RIVERS State Governor Nyesom Wike has awarded the construction of the ninth flyover in Port Harcourt worth N6.6 billion. The bridge is to be sited in his native community, Rumueprikom, in Obio/Akpor Local Government Area of the state.

Peoples TrackNews Online learnt Mr Wike has spent over N73 billion for the construction of flyovers within the state capital and his local government area.

All the flyovers contracts have always been awarded to Julius Berger, TrackNews Online learnt.

On Wednesday, the state government announced that the ninth flyover at Rumuepirikom is “necessitated by increasing vehicular activities and traffic jams at some entry points in Port Harcourt.”

Works commissioner Elloka Tasie-Amadi disclosed that the flyover which is expected to be completed within 12 months would be funded by a monthly deduction of N400 million from the state’s Internally Generated Revenue.

In a statement, Kelvin Ebiri, governor’s spokesman, said works ministry had proposed and received approvals from the State Executive Council for the construction of the flyover at Rumuepirikom; dualization of the first phase of the Ahoada-Omoku Road as well as internal roads in Omerelu.

In October 2019, Wike simultaneously awarded three flyovers to Julius Berger worth N21 billion. The length: of the flyover bridges include: Artillery 1 and 2, 517.5 metres, Rumuokoro 360 metres, and Garrison 360 metres. All three have since been commissioned.

Mr Wike, however, approved the fourth flyover worth N18 billion to be sited at GRA junction along Aba Expressway.

The amount is said to cover the dualisation of Tombia Extension Road to Ikwerre Road and Ezimgbu Link Road to Stadium Road in the state capital among several road infrastructures.

Information commissioner Paulinus Nsirim revealed that “The roads for expansion is 680 meters while that of the flyover is 502 meters. The government took the decision to further strengthen its infrastructural development drive.”

Last year August, the governor also awarded the fifth flyover worth N15.8 billion to Julius Better to be sited at GRA, including the dualisation to Ezimgbu link Road.

Mr Wike said: “We have signed the papers for the award of N15.8b contract for the GRA Flyover and the dualisation of the Ezimgbu Link Road up to Stadium Road, and from Genesis Eatery Axis of Tombia Road up to Ikwerre Road.”

Although Mr Ebiri disclosed that the governor had made a commitment to construct the sixth flyover at the Kaduna Street Junction of Aba Road, TrackNews Online could not verify the exact project cost.

“The construction will involve a bridge of 593 meters and service lanes of about 770 meters. The reason behind this is that you will observe that the bridge (at Kaduna Street Junction) is a two-lane bridge. And we are going to make it a four-lane bridge, dual carriage,” Mr Ebiri said, quoting Mr Wike.

In addition, the governor awarded the 7th and 8th flyovers in early March, saying both cost N12.4billion.

Mr Wike on his official Twitter handle said “One of the flyover bridges will be at the intersection of Olu-Obasanjo Road and Port Harcourt Aba Expressway popularly called “Waterlines Junction”, and it will be 800 meters long.” 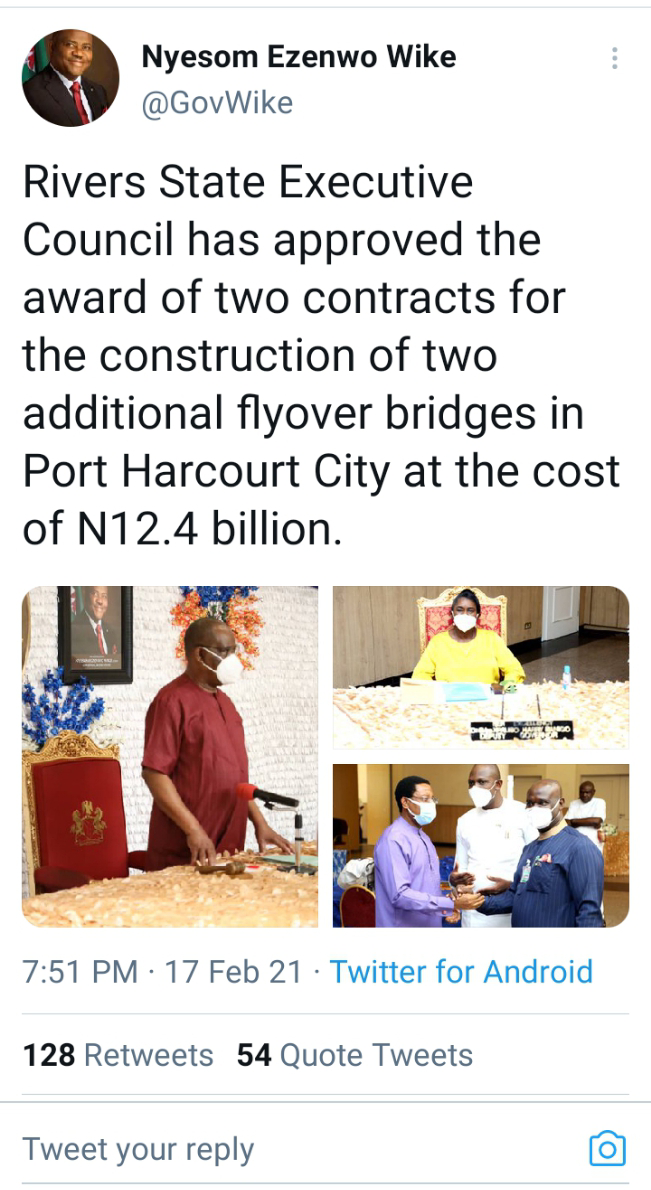 “And the other flyover bridge will be at the intersection of Olu-Obasanjo and Ikwerre Road up to the Azikiwe Street and will be 1KM long,” he added.

Rivers residents have however accused the governor of concentrating on development in his community, leaving other local government areas to suffer. But, Mr Wike had since debunked the claim.

Rights group, Rivers Anti-corruption Network, had sued the governor and the state government over failure to tender the cost of recently awarded projects in the state.

The group said they approached the court following denial of the state government to release cost documents of projects despite demanding the document in line with the FOI Act.