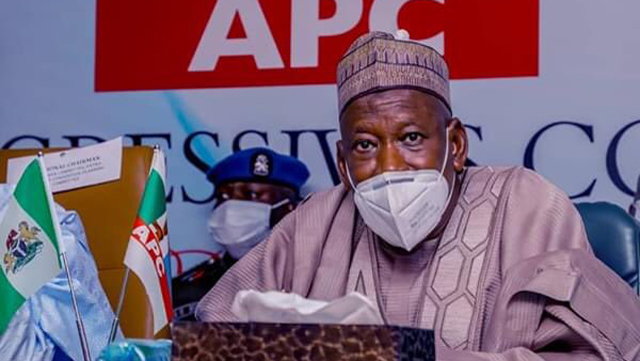 The Governor of Kano State, Dr. Abdullahi Umar Ganduje, has said that the ruling party has begun preparations to receive some PDP governors in the run-up to the 2023 general elections.

Recall that TrackNews Online recently reported that Cross Rivers Governor Ben Ayade has switched from the PDP to the APC .

With this is speculation Zamfara state governor, Bello Matawalle, might return APC at any time, Naija News understands.

Ganduje made the remarks at the Kano State Governor’s Lodge in Asokoro, Abuja during a courtesy visit by the APC Registration Committee chaired by Farouk Adamu Aliyu.

“For your information, there are indications that more governors are coming to our great party, the APC, from other places. Our internal democracy is waxing stronger day by day,” Mr Ganduje was quoted as saying in a statement by his spokesman, Abba Anwar.

Ganduje denied allegations that some APC members had been cheated during the registration / revalidation process in Kano State, saying:

“As far as we are concerned nobody was marginalised in the exercise.”

“If some people feel they are marginalised in the exercise, our doors are still opened. So we are ready to register any one, no matter his position, no matter his opinion about us and the party.” he said.

Related Topics:2023: Some PDP Governors Will Switch To APC Soon – Ganduje
Up Next