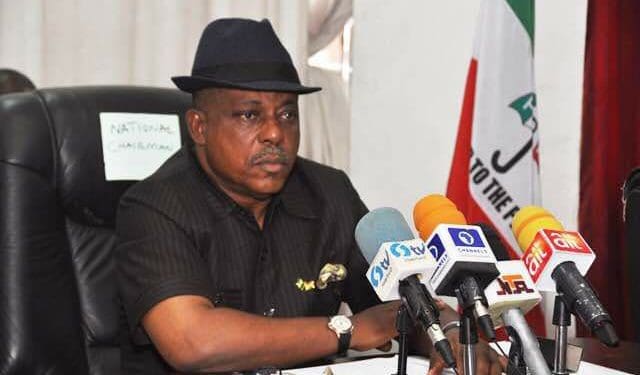 All is not well in the Anambra State chapter of the Peoples Democratic Party (PDP) as a governorship aspirant Zeribe Ezeanuna has sued the party for wrongful exclusion.

TrackNews Online reports that the Anambra State Governorship Election is set to hold on the 6th of November, 2021.

Also joined in the suit were the PDP National Chairman, Uche Secondus and the Independent National Electoral Commission (INEC) for allegedly forcing him to pay N5m compliance fee as precondition for participating in the June 26, 2021 PDP primary.

The suit which is pending at the Federal High Court Awka, also has the PDP National Organizing Secretary, Col. Austin Akobundu (retd), and the Anambra State chairman of the party, Chief Ndubuisi Nwobu, as defendants.

The aspirant is also claiming N50m from each of the four defendants as damages for infringing on his human rights and discrimination on the basis of gender.

Lawyer for the plaintiff, Jezie Ekejiuba on behalf of his client asked the court to grant him an ex parte order, for interim injunction restraining them, their privies, servants, agents and those they represent from proceeding to conduct the PDP governorship primary scheduled for June 26, 2021 or any other date, pending the hearing and determination of the motion on notice.

He accused the PDP and its officials of placing a ‘commercialized and prohibitive’ fee of N5m on his client as pre-condition for his participation in the pre-primary election, adding that such fee was unknown to the electoral guidelines for gubernatorial elections.

He prayed the court to declare that the refusal by the defendants to allow his client to pay the sum of N1m to obtain the PDP expression of interest and nomination forms as the female and richer aspirants was discriminatory against the plaintiff as it infringed on his fundamental right to freedom from discrimination under Section 42 (1) (a) and (b) of the 1999 Constitution of Nigeria as amended, among other reliefs.

Related Topics:Drama As PDP Aspirant Drags SecondusINECothers to court’
Up Next

2023: ‘APC Is Determined To Remain In Power Indefinitely’ – Falana