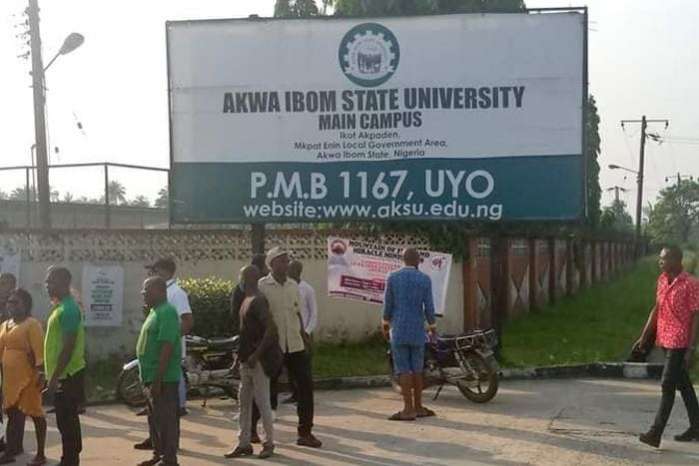 Students of the Akwa Ibom State University (AKSU), who responded to the resumption directive of the Vice-Chancellor, Prof. Nse Essien, were on Monday stopped from accessing the two campuses of the institution at Obio Akpa in Oruk Anam and Ikot Akpaden in Mkpat Enin local government areas.

Students of the Akwa Ibom State University (AKSU), who responded to the resumption directive of the Vice-Chancellor, Prof. Nse Essien, were on Monday stopped from accessing the two campuses of the institution at Obio Akpa in Oruk Anam and Ikot Akpaden in Mkpat Enin local government areas.

Students had remained at home for over 10 months while the state government, school management, lecturers and non-academic staff of the institution wrangled over the “No Work, No Pay” stance.

However, the Registrar of the institution, Mr. John Udo, had issued a Press Release mandating all staff to return to their duty posts today, Monday, June 7, 2021, noting that salaries would be on “No Work, No Pay” basis.

The release said: “The Vice-Chancellor has directed all staff members of Akwa Ibom State University to return to their duty posts by Monday, June 07, 2021 and that payment of salaries from the month of June 2021 will be based on “no work no pay” Government policy.

“The Vice-Chancellor has appealed to all members of staff to comply accordingly.”

When THEWILL visited the main campus in Ikot Akpaden, lecturers were seen positioning themselves at the entrance of the gate to bar students from entering the premises.

Some students were allegedly beaten and not allowed to enter the school premises.

Some of them at Obio Akpa campus lamented that they did not finish their second semester examination before the lecturers embarked on the strike.

One of them who preferred to remain unnamed for fear of victimisation said, “I just came to school this morning because of the announcement that we should resume today, but the whole environment is in disarray, we can’t enter the campus. Even security men are instructed to drive us away.

“When I arrived at the school gate, I met some lecturers and they told me that I should go home because they are not returning to the classroom until they are paid.

“The Vice Chancellor just ordered the lecturers to commence academic activities but they are saying no salary, no work. But our concern is that thieves have started breaking into students’ rented rooms off-campus, and stealing students’ things.

“It is a serious situation. Some students locked their rooms and travelled because of the strike, because we don’t have hostel accommodation here.”

The ASUU chapter of the institution had embarked on strike towards the end of April to protest the payment of 75 percent of their salaries for over10 months.

In response to the issue, the Akwa Ibom State Governor, Mr. Udom Emmanuel, had in a recent media interactive session in the state, said he released N329 million every month to the management of the institution.

But the ASUU Chairman, Dr. Ime Okop, said its members would remain on strike as long as they did not receive payment alerts of their salaries and other entitlements, adding that the lecturers were not prepared to shift ground on the matter.

Okop frowned at the situation where both the state government and the management of the university were playing pranks with the issue of education.

It would be recalled that the Vice Chancellor of Akwa Ibom State University, Prof. Nse Essien had assured the State House of Assembly that the institution was going to resume academic activities.

Appearing before the house, Essien said, “We are on top of the matter and we are having a series of meetings with various stakeholders to make sure that students and lecturers return to classrooms by next week.”

The Chairman of the Committee, Hon Godwin Ekpo in his remarks urged the Vice Chancellor to do everything possible to bring to an end the lingering crisis in the university,

He said the House was concerned that the strike adversely affected the completion agenda of the present government with education as a critical point on the agenda.

On January 4, the Akwa Ibom State Government, management and the unions in the university reached resolutions to end the prolonged strike.

The resolutions included immediate payment of three months backlog of 25 percent salary arrears to staff of AKSU for January, February and March 2020, stoppage of payment of 75 percent salaries, and constitution of a Visitation Panel by the Visitor of the University, Udom Emmanuel.