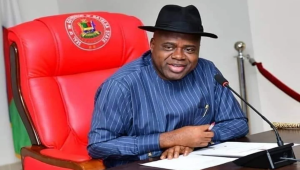 TRACKING_____Bayelsa State Governor, Douye Diri has raised the alarm over the increasing proliferation of arms and the worsening insecurity in all parts of the country.

He raised this alarm at the weekend when the Theatre Commander of Operation Restore Peace in the South-South and South-East, DIG Moses Jitoboh, led a delegation of senior officers to pay him a courtesy visit at the Government House, Yenagoa.

The governor was represented by his deputy, Mr Lawrence Ewhrudjakpo.

He called on the Federal Government to adopt a holistic approach in the fight against insecurity in the country, particularly in the North.

Diri noted that although peace was being threatened in all geopolitical zones of the country, special attention must be given to the Northern region in tackling the issues of porous borders, alleged influx of foreign herders and the unabated farmers-herders clashes.

The governor said, “The arms that are being circulated, we don’t know where they are coming from. So, we want to request that this same effort you are making here should go round the country, so that there will be peace everywhere in the country.

“We will be happier if the entire country is peaceful rather than having peace only in our state. So, we want to use this opportunity to call on the Commander-in-Chief of the Armed Forces and the police to do something about what is happening in the North.”

Related Topics:Bayelsa Gov Raises The Alarm Over Arms Proliferation
Up Next