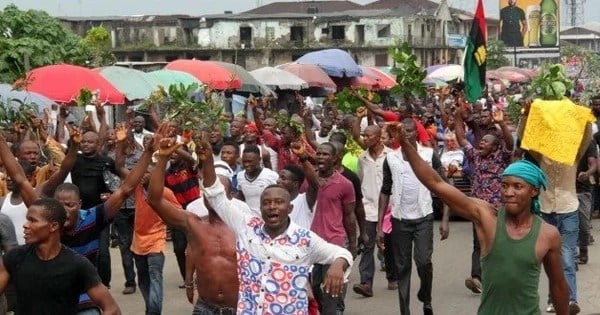 The Nigerian Police has revealed that some members of the Indigenous People of Biafra (IPOB) are gathering in Edo State to spread secessionist messages across the state.

TrackNews Online reports that this was disclosed by the Deputy Inspector General of Police, in charge of Operation Restore Peace in the South-South region, DIG Moses Jitoboh, on Wednesday.

He made this known while speaking during a stakeholders meeting and the launching of Operation Restore Peace in the South-South region held in Benin City.

The Police DIG asked the people in the communities where IPOB members are holding their various meetings to report same to the police for urgent attention, noting that it is better to nip them in the bud than allowing it to grow into something else in the state.

He said his mission in the region was to restore peace, noting that President Muhammadu Buhari inaugurated what is called Operation Restore Peace in the troubled region (South-South and South-East) and that he is in charge of the South-South region.

IPOB vs Gulak: You Are Badly Shaken – Fani-Kayode Roasts Uzodinma