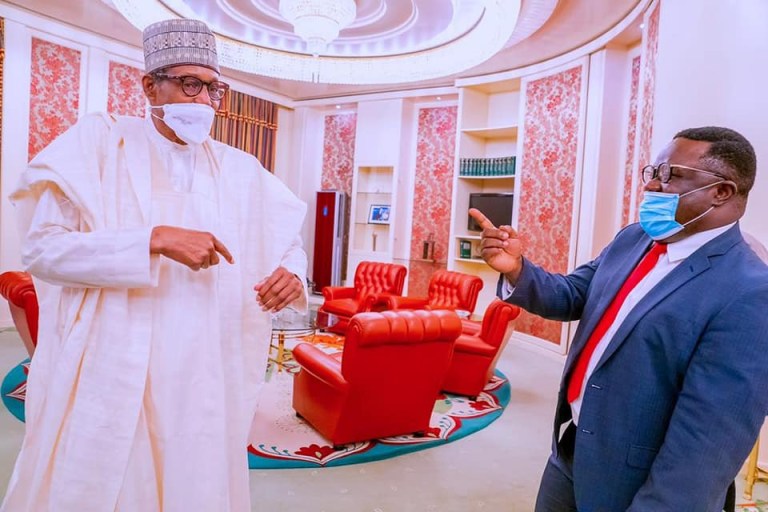 The details of the meeting between President Muhammadu Buhari and Governor Ben Ayade of Cross Rivers State have emerged.

Speaking to journalists after he visited President Muhammadu Buhari at the Presidential Villa on Thursday, Ayade accused foreign countries of supporting the Indigenous People of Biafra (IPOB) for secession.

He alleged that some foreign countries target nations with natural resources, and support secessionist agitations because they want to boost their gun trade.

The governor, however, asked Nigerians to support President Muhammadu Buhari and the military to tackle insecurity and foster peace in the country.

He said: “The country is snowballing into a civil strife. We need to come together and support Mr. President to overcome the insurgency which is characterised by external militias who are paid for the purpose.

“I know very clearly that they have basic interest in our natural resources, especially our tantalite and cobalt-related derivatives, as well as diamond and gold. As you know, what this international community does for Africa, once they see large deposit of natural resources, they will be glad to see such country go to war.

“The increasing insecurity in Nigeria suffers attacks from extraneous aggressors, paid militia and bandits. The opposition party only celebrates that because they believe it gives them a chance to win in 2023. So, opposition becomes very cannibalistic. You rejoice over the bloodbath in your country; you rejoice over the level of insurgency and killings in your country just because you are playing opposition.”

On his defection from the Peoples Democratic Party (PDP) to the All Progressives Congress (APC), Ayade said while he still respects his former party, he decamped because he trusts Buhari’s leadership.

“I am one of the strong Nigerian governors who have risen beyond party lines and ethnic lines by virtue of my education and exposure. My choice to join APC is generating a lot of concern for the PDP occasioned by the fact that it came as a rude shock. And sincerely, it is indeed a rude shock because until I defected, I was a very strong member of the party in truth and in spirit,” the governor said.

“I moved into the APC because if my personal relationship with Mr. President. I have watched him and I find honesty, integrity and I see his wish and commitment to the federal republic of Nigeria. To that extent, I have a leader that I trust.”

Related Topics:Details Of Buhari’s Meeting With Ayade Emerge
Up Next