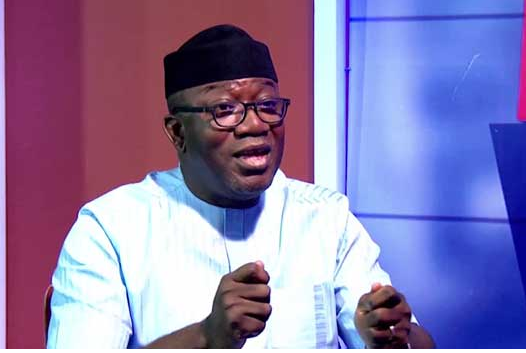 Governor Kayode Fayemi of Ekiti State has revealed plans by the Indigenous People of Biafra (IPOB) and Yoruba Nation agitators to destroy the country.

According to the chairman of the Nigerian Governors Forum, the part of the plan of the agitators was to destroy the country through their divisive rhetoric and the proliferation of conflict centres.

Fayemi made this known in Ado Ekiti on Friday at a colloquium held in commemoration of the June 12, 1993 presidential election with the theme, ‘June 12: Securing the Freedom of Democracy.’

He claimed that the secessionists were only taking advantage of the worsening insecurity in the country without considering the consequences of their actions.

The governor alleged that some external forces are collaborating with domestic agitators and conspirators “to dismember Nigeria and cause an untold humanitarian crisis.”

Fayemi said, “The most striking lesson of the election is that the unity of purpose and open-mindedness are needed for our country to escape the relentless efforts of some elements to subvert our country’s corporate existence.”

He said, “The security challenge that confronts us today is a direct threat to the future of our country because of its asymmetric nature. And worse, because of the disunity among the Nigerian elite on how to confront what is clearly a threat to their survival.”

Meanwhile, Governors in the Southeast part of Nigeria have publicly condemned activities of the Indigenous People of Biafra, IPOB.

Naija News reports that the governors in a statement issued on Saturday, said the Biafra agitators are not speaking for the entire region on the call for secession.

The political leaders had met on Saturday in Enugu State to lay out plans on curbing the current security crisis rocking the region, condemned all secession agitation in the country. Naija News understands that the Chairman of the forum, David Umahi while addressing newsmen shortly after the meeting, said they believe in one Nigeria.

He said: “We condemn in totality, the activities of violent secessionist groups in the South East and elsewhere.

“We firmly proclaim that we do not support them, they do not speak for South East.

“The impression that South-East leaders are silent over some of our youths’ agitations for secession is not correct.

“South-East Governors, Ohanaeze President, National Assembly members, notable leaders had come out publicly many times in the past to speak against such agitations.

“In order not to mismanage the unfortunate situation, South-East leaders have set up a committee to engage such youths to stop and allow elders speak to address such fears,” he said.