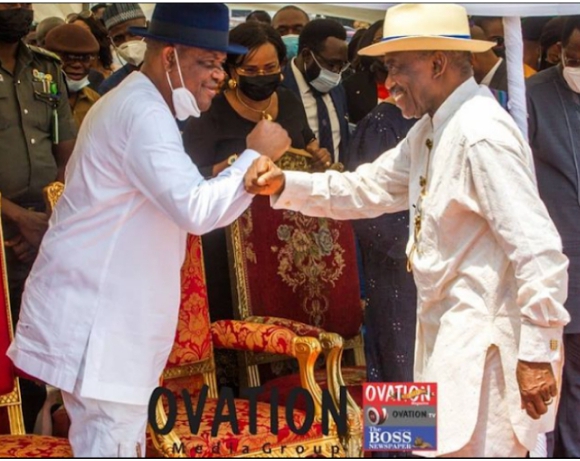 Former Governor of Rivers State, Dr. Peter Odili has declared that incumbent, Governor Nyesom Wike is the best Governor ever in the history of the state and the best in Nigeria today.

The usually measured Dr Odili, who was speaking at the flag off of the N25.9billion Cancer and Cardiovascular Diseases Diagnostic and Treatment Centre stated that on account of his monumental people-oriented projects ,Governor Wike had no rival.

Noting that Gov. Wike has rescued Rivers and restored its pride, he prayed God to be with the Governor but wondered why this facility was named after him?

In his speech, Gov. Wike said Dr. Odili was over qualified for the honour because of his contribution to the state.

He said he thanks God for giving him the opportunity to honour a giant like Dr Odili in his lifetime. He said the hospital will be the best in Nigeria and will be tastefully equipped because the people of the state deserve the very best.

Related Topics:Former Gov Peter Odili Declares That Gov Wike Is Best Rivers State Gov Ever And Best In Nigeria Today
Up Next

2023 Successor: Okowa Falls Out With Ibori