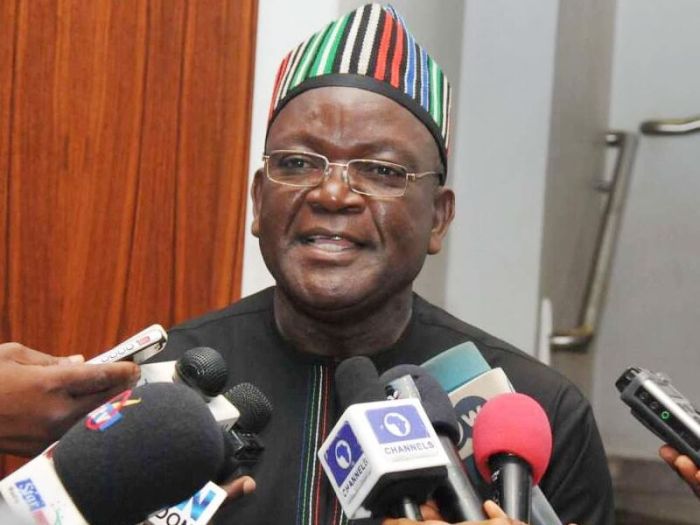 Members of the Jemgbagh Peoples Democratic Party (PDP) Unity Forum, comprising Gboko, Buruku and Tarka Local Government Areas of Benue State, have lauded the courage exhibited by Governor Samuel Ortom in defending the people of the state against Fulani herdsmen.

The members, made up of prominent party stalwarts, government appointees, women and youths conveyed their feelings when they paid Governor Ortom a courtesy visit at the Benue Peoples House, Makurdi, the state capital.

Interim President of the Forum, Prince Yandev Amaabai, said just like God brought the late Aper Aku to provide infrastructure based on the needs at his time, God brought Governor Samuel Ortom at this time to deal with the security situation.

Prince Amaabai stated that the Open Grazing Prohibition and Ranches Establishment Law which the Governor had promulgated and is being embraced by Nigerians had exposed an evil agenda against Benue people and Nigeria at large, stressing that the multiplier effect of the law would forever be remembered.

He expressed delight that aside from securing the state from being occupied by herdsmen, Governor Ortom has recorded other tangible achievements such as the construction of roads and township streets as well as massive renovation of primary schools across the state among others.

Speaking for Gboko Local Government, Chief Terngu Tsegba, Laha Dzever for Buruku and Mr Adicks Alu for Tarka noted that the Governor has performed well in security and other areas and assured of supporting him to do more for the state.

Others including, Mr Mike Mku, Mrs Lydia Nyor for women and Mr Tivzua Zuana, thanked Governor Ortom for contributing to the development of PDP in the state and North Central and promised to stand with him in his future political ambition.

Responding, Governor Samuel Ortom said the Federal Government led by the All Progressives Congress (APC) has failed the people in terms of security and enjoined the people to key into the Community Volunteer Guards to end herdsmen attacks and root out cultism.

Governor Ortom expressed joy that every Nigerian has come to acknowledge the prohibition of open grazing as the solution to the herdsmen menace except the presidency which is insisting on opening grazing routes, saying he would continue to speak out against criminality being perpetrated by herdsmen.

The Governor commended the Jemgbagh PDP Unity Forum for the initiative of coming together to speak with one voice and enjoined them to sustain the love among them to foster development in their communities.