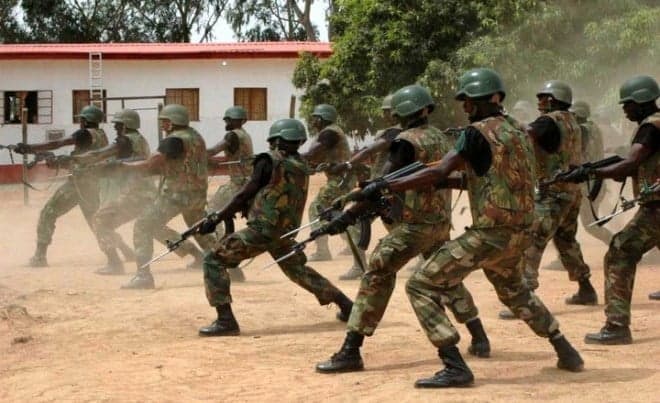 The Nigerian Army has said that it would begin its annual range classification exercise from Sunday, June 13, to Sunday, June 27.

In a statement in Port Harcourt on Friday by the 6th Division spokesman, Lt.-Col. Charles Ekeocha said that the exercise aimed at ascertaining the professional competence of troops on the use of firearms.

He said troops from the division and its affiliated formations and units would conduct the exercise at the Army Shooting Range in Igwuruta and Elele Barracks, both in Ikwerre Local Government Area of the state.

Ekeocha, however, advised the public not to panic over the movement of troops, military hardware, and sound of gunshots.

“The shooting exercise is a routine activity in the Nigerian Army which involves the firing of various caliber live ammunition.

“Members of the public, especially residents of Igwuruta and Elele, as well as its environs, are advised to keep away from the general shooting area,” he said.

Meanwhile, the United States Mission to Nigeria on Friday warned its citizens in the country to avoid the June 12, 2021 protests which will take place on Saturday.

Naija News reports that the US made this known in an advisory titled, ‘Demonstration Alert: US Mission Nigeria (June 11, 2021) – Nationwide Protests on Democracy Day.’

The embassy advised American citizens to keep a low profile and avoid the areas where the protests will hold.

According to the Mission, it is likely that the protests will take place at the Unity Fountain, Abuja; and Lekki tollgate plaza and Gani Fawehinmi Park in Lagos.

The advisory read in part, “Several groups have announced their intentions to protest nationwide on June 12, Democracy Day. Police presence and response can be expected nationwide, including in Abuja where government events are scheduled to celebrate the national holiday and in Lagos where simultaneous protests are planned.

“Actions to Take: Avoid the areas of the demonstrations. Exercise caution if unexpectedly in the vicinity of large gatherings or protests. Monitor local media for updates. Keep a low profile.”

Related Topics:Insecurity: Army To Begin Shooting Exercise In Rivers
Up Next