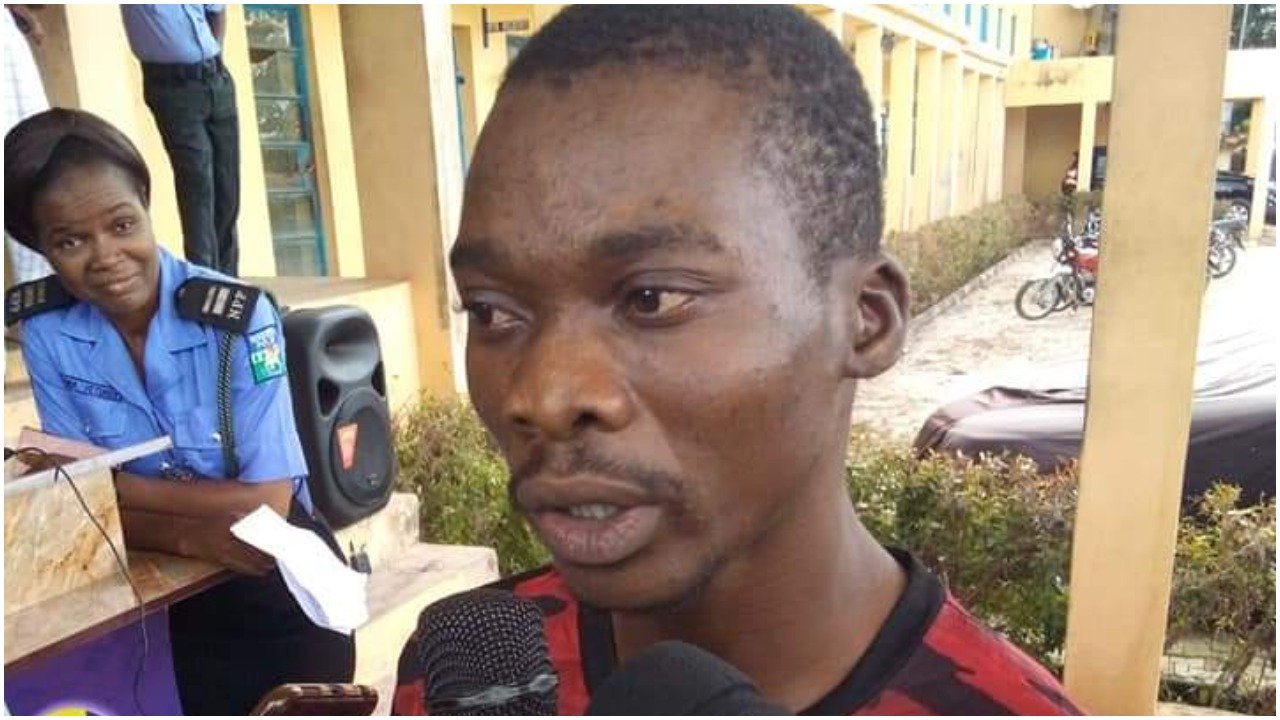 A 28-year-old suspected armed robber, Gbenga Kikiowo, who was arrested by men of the Ondo State Police Command, has disclosed how he ventured into robbery since the age of seven.

According to Kikiowo, who was arrested alongside one of his gang members, Tope Aladeloye, 25, his motive was to be as popular as known notorious armed robbers in the country such as Ishola Oyenusi, Lawrence Anini and Shina Rambo.

Kikiowo made the confession when he was paraded at the state police headquarters in Akure, the state capital.

The suspect, who said that he started robbery at his home town in Igbara-Oke, headquarters of Ifedore Local Government Area of the state at a tender age, said he had been to jail three times as he blamed spiritual attacks for his engagement in social vices.

Narrating how he was arrested in Akure, Kikiowo, who disclosed that he had participated in armed robberies in Ghana, said that it was when he was on his way to buy bullets ahead of an operation within the Oke-Aro area of the state capital that he was nabbed.

“I called my partner who normally goes with me for operations. I informed him that I have a gun with me but there’s no bullet. So he told me to bring the gun down to Akure from Ife which I did. It was on our way to buy the cartridge that we were arrested by the Scorpion Squad of the police.

“Honestly, I don’t have any genuine reason for what led me to crime because I was born into a very rich family. I suddenly started stealing from my parents. They believed in traditional custom and that’s what they practice, so the more they use spiritual solutions for me to stop my criminal act, the more I steal.

“I even went to Ghana to rob. After a while, I brought my squad to Nigeria and we were arrested during an operation in 2015 and we’re remanded in the Olokuta prison.

“My father’s name is Kikiowo Ayodele. He’s a very popular man in Igbara-Oke axis and married six wives with 24 children. He’s a well known retired soldier and also a farmer. He is rich in his own capability, not educated but believes in his rugged life and farming.

“My last hope was the gun I was caught with because I had made up my mind to quit local crime for big ones, like going internationally. That’s why I took the risk to look for a gun. I wanted to become an international armed robber like Mufu Olosha Oko and Oyenusi because I wanted my name to reign. I believed that it’s through crime that it could reign,” he said.

Kikiowo added that if not for the gun, there was no way the police would have arrested him, stressing that he believed more in using intelligence to operate.

“Through intelligence you can operate and do all things and you will achieve it. Let me tell you, I don’t look for money when I enter your room. I smell money,” he said.

On his part, the State Commissioner of Police, Bolaji Salami, said on May 24, 2021, the command received from a reliable source about the move of a gang of armed robbers to carry out a robbery operation in Akure metropolis.

The police boss said on receipt of the information, detectives swung into action and in the process, one Kikiowo and Aladeloye were arrested at Oke-Aro, Akure.

“The suspects also confessed to have been involved in other robbery operations within and around Ondo State. Items recovered are, one pump action gun,” he said.

Salami added that Kikiowo and other paraded suspects will be charged to court soon.

Related Topics:My admiration for AniniShina Rambo lured me into robbery at age seven – suspect
Up Next