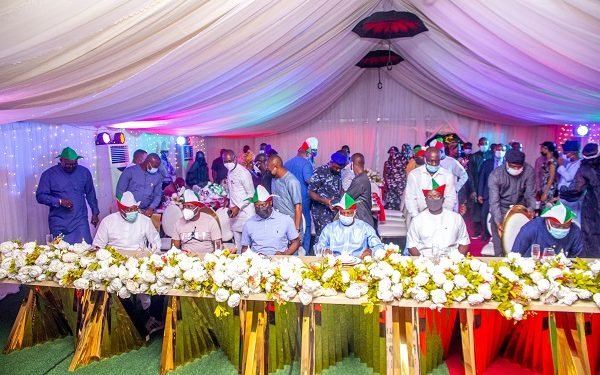 The National Working Committee (NWC) of Peoples Democratic Party (PDP) has summoned an emergency meeting today to discuss the planned defection of the Zamfara State Governor, Hon. Bello Matawalle, to the All Progressives Congress (APC) tomorrow.

In an announcement yesterday by the Commissioner for Information, Mr. Ibrahim Dosara, the state government invited the governor’s supporters to witness the defection.

The statement further said the Kano State Governor, Dr. Abdullahi Ganduje, and other APC stalwarts would receive the Zamfara State governor into APC.

The Director-General of Media in the state, Mr. Idris Yusuf, had earlier yesterday told THISDAY that the governor would address journalists on the issue tomorrow.

But the PDP said yesterday that Matawalle had not informed it that he was defecting to the APC.

National Publicity Secretary of the PDP, Mr. Kola Ologbondiyan, told THISDAY: “All I can tell you is that an emergency meeting of the party will take place on Monday and the report of the defection will be discussed.

“Also for now, the governor has not informed the PDP that he is leaving the party.”
However, concerns have been raised that it would be legally impossible for Matawalle to defect.

The reason is that the Supreme Court’s decision, which ceded the Zamfara State governorship to the PDP immediately after the 2019 elections, did not consider any individual in arriving at the decision but the party.

The judgment of the Supreme Court is believed to have made the opposition party the owner and sole beneficiary of the governorship and not Matawalle.

Already, arrangements are said to have been perfected for the governor to defect to the APC tomorrow, and he is expected to be received by the ruling party’s National Caretaker Committee Chairman and Yobe State Governor, Mai Mala Buni.

Also, as a prelude to the defection, Matawalle had on May 31, sacked his cabinet, including the commissioners, special advisers, the Secretary to the State Government, chief of staff and the deputy chief of staff in other to be able to accommodate some members of the APC in the new calculations.

It was gathered that the cabinet sacking was to prevent some commissioners from refusing to defect with him and avoid the kind of backslash experienced in Ebonyi and Cross River States, where some commissioners and aides refused to go to the APC with their former principals.

The governor, it was learnt, has been promised a return ticket for 2023. He is currently serving his first term in office.

In 2019, the APC won all the state and national elections in Zamfara State, the PDP came second but due to the Supreme Court judgment, the PDP inherited the victory across the board.

The state was considered an APC state and it was, therefore, to ensure his re-election in 2023 that Matawalle was being poached to defect to the APC.

Another party source also hinted: “There is no free ticket for him in the APC by 2023, as the former governor of the state, Mr. Abdulaziz Yari, and Senator Kabir Marafa have reconciled and will surely give him a fight.”

The source said it was not certain if all PDP senators and members of the House of Representatives that benefited from the Supreme Court’s judgment would be willing to defect with him.

Yari, Zamfara’s immediate past governor, is plotting to become the national chairman of the APC, and has been at daggers-drawn with Matawalle, who became an unexpected beneficiary of the APC crisis in the 2019 primaries in the state.

A PDP source said the party was in possession of an intelligence report that the Zamfara governor had gone as far as seeking the opinions of some top judicial officers who had told him that leaving the PDP could cost him the seat, based on the Supreme Court’s judgment of 2019.

Related Topics:PDP summons emergency meeting as another Gov defects to APC
Up Next