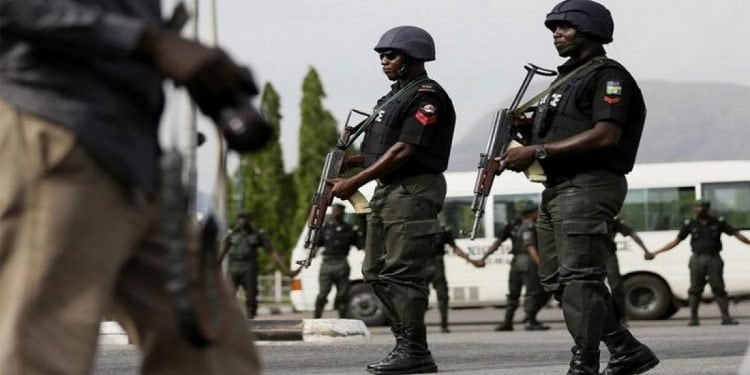 A joint team of security operatives has arrested a notorious armed robber, Diamond aka Fowlboy suspected to be responsible for many acts of terrorism in Delta State.

TrackNews Online understands he was gunned down during an exchange of gunfire by a team of security operatives comprising policemen and vigilantes in the Sapele area of the state.

The killing of the suspect attracted jubilation from residents of the area and its environs.

Three other members of his gang however escaped with bullet wounds at Amukpe axis in Sapele.

The police recovered weapons and items including one cut-to-size locally-made gun, a military camouflage sweater, and seven different phones from the suspect.

The armed robbers were said to be on a robbery operation in the house of one man (name withheld) in Amukpe Sapele when security operatives were informed.

They quickly mobilized to the scene and engaged the criminals in a fierce shoot out.

Confirming the incident, the Delta State Police acting Public Relations Officer, DSP Bright Edafe said the police shot and injured the notorious armed robber who was rushed to the hospital where he was confirmed dead by the doctor on duty.

He added that “serious effort is on with a view to arresting the other fleeing members of the gang.”

Meanwhile, Governor Aminu Bello Masari of Katsina State has queried citizens for depending on security operatives to protect them from bandits and killer Fulani herdsmen.

TrackNews Online reports that the governor made this statement at the inauguration of Katsina Security Operations and Communication Control Centre at Katsina police headquarter on Friday.

According to Masari, it is irresponsible for citizens to expect the police or military to protect them against bandits.

The governor urged Nigerians to take the security of their life and property into their hands.

Related Topics:Fowlboy In Delta StatePolice Gun Down Notorious Armed Robber
Up Next

‘I Want Him To Succeed’ – Ortom Denies Insulting Buhari [Video]