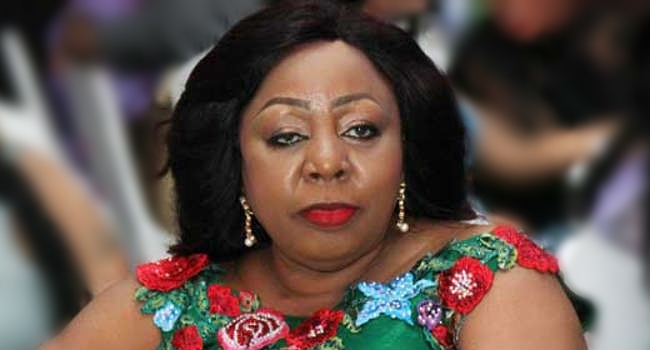 Tracknews reports the defection of the former Cross River Senator to the APC is coming days after Governor Ben Ayade of Cross River State joined the party two weeks ago.

It would be recalled that in 2017, Ita- Giwa dumped the PDP for the APC, before returning a year later, describing the APC as the home of confusion.

In a statement on Tuesday, Ita-Giwa said she rejoined the APC to support the vision of governor Ayade to lift the people of Cross River and state out of perennial poverty.

She added that it was incumbent on her part to do all in her power to ameliorate the hardship the people of the state are going through.

The Senator said she would not hesitate to do all she can to promote the state and its industrial revolution which was why she accepted to be the Cross River State Ambassador For Industrial Projects.

The statement reads: “At 75 years of age, nothing will please me more than to relax and enjoy my celebrity status, attend events in eye-popping outfits and so on, but when a very driven digital Governor like Ben Ayade comes along with such verve and a vision that will lift my people and state out of perennial poverty, I am left with no option than to support him.

“Cross River State has had to bear the brunt of many economic setbacks, the loss of our oil fields, then more poignantly to me personally was the ceding of Bakassi to Cameroon.

“In my position as a leader, it is incumbent on me to do all in my power to ameliorate the hardship my people are going through. In doing this I don’t mind being occasionally misunderstood by people who do not feel the pinch.

“What you described as mimicry is what I know to be the solution to my state’s perennial struggle with poverty and underdevelopment. Industrialisation holds the key to unlocking the vast potentials of my people and state.

“I, therefore, will not hesitate to do all that I can to promote it, which is why accepted to be the Cross River State Ambassador For Industrial Projects, even at the risk of being mocked by less discerning pundits.

“By the special grace of God, over the years I have amassed tons of goodwill both nationally and Internationally and I believe now is the time to put it to good use on behalf of my state. I fully intend to give this assignment my best, as I see it as the only path to the economic liberation of my people.”

Related Topics:Senator Ita-Giwa Dumps PDP For APC
Up Next