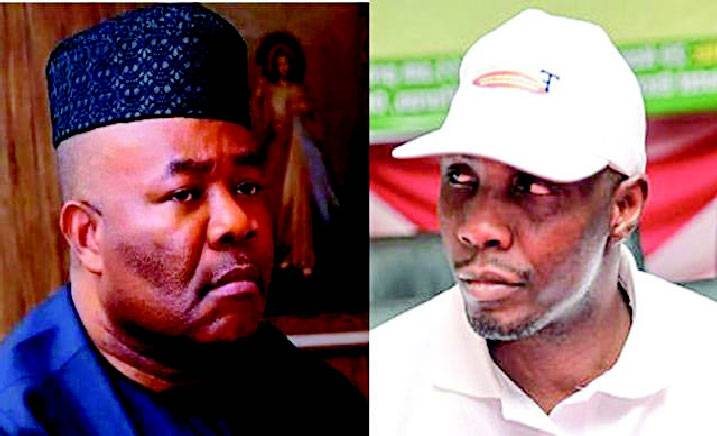 WHEN ex-militant leader, High Chief Government Ekpemupolo, alias Tompolo, after a meeting with Minister of Niger –Delta Affairs, Senator Godswill Akpabio, who scurried to the creek of Delta, June 3, vacated his seven-day ultimatum issued, May 31, to the Federal Government to immediately constitute a substantive Board for the Niger-Delta Development Commission, NDDC, it was with the understanding that the much-awaited Board would be inaugurated by the end of this month (June), that is, three days away.

Noticeably, Tompolo’s involvement and Akpabio’s subsequent meeting at Oporoza with leaders of Niger-Delta ethnic nationalities doused tension that had escalated in the region over the delay in inaugurating the NDDC Board, with militants prepared to strike at the expiration of the seven-day warning.

My treaty with Akpabio — Tompolo

Tompolo, in a statement after conferring with Akpabio, had stated: “The outcome of the meeting has been made known to the public by the Minister.

“He promised profusely to start the process of the constitution and inauguration of the substantive Board of the NDDC immediately (from Friday, June 4, 2021), and that he should be allowed to drive the process to an end on or before the end of June 2021.

“As it stands now, I have accepted the outcome of the meeting reluctantly.

“It is pertinent to state at this juncture that I do not want anything to disrupt the relative peace we are enjoying in the region.

Getting an Online Job in the USA May be Easier Than You Think
Online Jobs In USA
by TaboolaSponsored Links
“It was on this premise that I accepted the outcome of the meeting.

“The ultimate goal in this issue is for the Minister to abide by the promise he has made to start the process of constituting the NDDC Board now.

“Government shenanigans must be put away in this matter as constituting the NDDC Board is very dear to the heart of the people of the region”.

A leader of one of the Niger ethnic nationalities that met with the minister had also said: “We told him (Akpabio) to go back and inaugurate the NDDC Board before the ultimatum expires, but he was pleading that he should be given June ending and, another breath, adding first week of July.”

But, three days to the end of the month, improbability has beclouded the cutoff date of June ending which the stakeholders mutually agreed with the minister who promised to drive the process.

Akpabio passed the clue, Tuesday, June 22, approximately 18 days after his Oporoza consultation with stakeholders, that June 30 or first week of July were no longer practicable.

Fielding questions from State House correspondents at the Presidential Villa, Abuja, he said the final report would be ready by the end of July and submitted afterward to President Muhammadu Buhari for implementation.

Making no reference to June ending reciprocated understanding with Tompolo and other stakeholders, he said: “We have fast tracked the process of constituting the (NDDC) Board; but we insist that the most important thing is not just the development of the Niger Delta region but how to reposition NDDC to ensure optimal performance as against the practice in the past.

“So, the forensic audit of NDDC is on course and it is progressing very well and I am happy with the progress made so far. “And I am very certain that by the end of July, which is just a month and a few weeks away, the final result will be given to the President for implementation.

“And in terms of the composition of the Board of the NDDC, of course, we have fast tracked the process and the National Assembly will soon get the list.

“But that is not as important as the forensic audit which we are finally giving a deadline, which is July, that it will end.’’

He was hopeful that the new Board would use the recommendations of the forensic audit to reposition the commission and for effect.

Akpabio’s words: “So, my going to creeks to meet the traditional rulers and ex-agitators was in the interest of not just the security of the region but also the peace of the region.”

Okon went on: “He (Akpabio) talked about the list getting to the National Assembly soon, but we already have a substantive Board with former Edo deputy governor, Dr. Pius Odubu, as Chairman and Mr. Bernard Okumagba (Delta) as Managing Director.

“Which list is he talking about? We all know that the National Assembly will proceed on recess in either the first or second week of July and the vacation is until end of September.

“So, when is the list getting to the Senate? Is it when the lawmakers are on holiday? The next thing they will say at July ending is that the Federal Executive Council will deliberate on the forensic audit report and take decision before implementation, all these to further delay the inauguration of the Board?”

The minister seems not alone on his position, however, as Buhari, who met, Thursday, June 24, with the national executive of Ijaw Nation Congress, INC, led by Prof Benjamin Okaba, also restated that the Board would be inaugurated as soon as the forensic audit report was submitted and accepted.

“Based on the mismanagement that had previously bedeviled the NDDC, a forensic audit was set up and the result is expected by the end of July, 2021”, the President told his visitors.

“I want to assure you that as soon as the forensic audit report is submitted and accepted, the NDDC Board will be inaugurated”.

From Buhari and Akpabio’s declarations, it is possible that the June ending deadline may be botched, but will the stakeholders and militants understand and exercise more patience?

While those used to the postponement of NDDC Board inauguration for close to two years would surmise that “it is the usual style” and some militant groups would be spoiling for action, Tompolo, despite the unlikelihood of his June wind-up deadline, may be guarded in sanctioning any attack.

He had, in accepting the minister’s imploration for time after his seven-day ultimatum, stated, in his June 4 statement, that the ultimate issue was for Akpabio to abide by his promise to start the process of constituting the NDDC Board without much ado.

Delta State Deputy Governor Kingsley Otuaro, who was at the June 3 meeting between Akpabio and Tompolo, had, in a statement by his Senior Special Assistant on Press and Communication, Bulou Kosin, said: “Tompolo eventually rationalized that the Niger Delta Affairs Minister, Akpabio, who humbly came to Oporoza to state his case, would be practically constrained by the small space within the 7-day ultimatum.

“Since Senator Akpabio promised to speedily complete the inauguration of the NDDC Board process he claimed to have already commenced, it was ideal to allow little space to Senator Akpabio and review implementation of the ultimatum, which will otherwise stall oil production, create possibly bloody clashes and foreclose the very inauguration agitated for”.

Otuaro, in the open assembly between Akpabio and stakeholders, had posited: “We cannot explain why an institution as the NDDC, which is a product of an Act, is being run in flagrant abuse of the power establishing it on the guise of a forensic audit.

“There must be a substantive board for goodness sake. The voice of the people should be listened to”.

Related Topics:Tension in N-Delta over Akpabio’s timeline to Tompolo on NDDC Board
Up Next