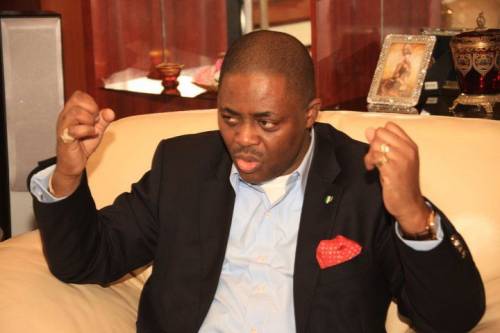 Former Minister of Aviation Femi Fani-Kayode has condemned President Muhammadu Buhari over his threat on Twitter to the people of the Southeast in Nigeria.
TrackNews Online recalls the micro-blogging site deleted President Buhari’s tweet wherein he spoke about the civil war experience.

The President in a tweet on Tuesday threatened to deal with those bent on destroying Nigeria through insurrection.

In a post on Twitter, the president wrote, “Many of those misbehaving today are too young to be aware of the destruction and loss of lives that occurred during the Nigerian Civil War. Those of us in the fields for 30 months, who went through the war, will treat them in the language they understand.”

However, the social media platform deleted the message on Wednesday, following widespread condemnation of the tweet.

According to the PDP stalwart, Nigeria should be apologising for what she did to the Biafrans in the civil war and not threatening to do it all over again.

Fani-Kayode wrote: “This statement from President Buhari saddens me. The suggestion that another 3 to 5 million Igbos, including 1 million children, may be subjected to genocide again for whatever reason is unacceptable and I condemn it in the strongest terms.

“Nigeria should be apologising for what she did to the Biafrans in the civil war and not threatening to do it all over again.

“State-sponsored genocide, ethnic cleansing, religious cleansing and mass murder has no place in a civilised country. Only savages animals and barbarians indulge in such things.

“No matter how you feel about the Igbos you have no right to threaten to visit them with death and destruction.

“They are not animals and they are not slaves: they are human beings and like all the rest of us, red blood flows through their veins!

“I am glad that @Twitter removed Mr. President’s tweet. It did more damage to the psyche & confidence of the Igbo than all the killings that have taken place over the last 5 years.

“It has also traumatised millions of non-Igbo Nigerians who believe that the same treatment may be visited on them.

“Mr. President’s comment is insensitive, irresponsible and wicked and I sincerely hope that he will never say such a thing again.

“Can you blame those that want to establish Biafra when the President of Nigeria can say such things and issue such threats?”

Biafra: Top APC Senator To Igbos – Nigeria Will Give You War If You Want War