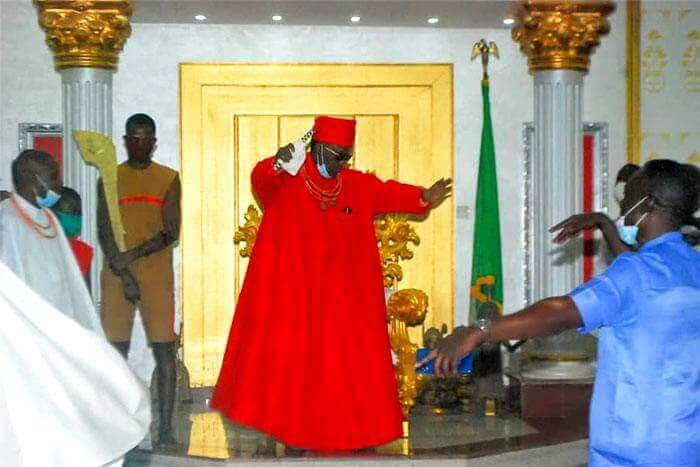 The Oba of Benin, Omo N’Oba N’Edo Uku Akpolokpolo, Ewuare II, has said that all native doctors in the entire Benin Kingdom are under his control.

Oba Ewuare II said witch doctors in Edo who fail to subject themselves to his control would go to hell.

The monarch stated this during a live conference organised by his palace to address controversies between the royal house and the Edo State Government over the planned return of artefacts stolen from the Benin Kingdom by British colonial masters 124 years ago (1897).

On the sidelines of the press conference, Oba Ewuare spoke on activities of herbalists who allegedly prevent girls trafficked for prostitution from exposing human traffickers.

He said, “…. all the native doctors here are under our control. Those that don’t want to be under our control will go to hell. You know they will go to hell fire as the Penticostal Christians call it. We advice them to stay away from holding these girls to ransom and making them take oath, so that they can feel free to speak NAPTIP and human trafficking agencies and all that.”

The state has suffered kidnapping and human trafficking issues which were reportedly linked to the activities of native doctors.

An estimated 94 per cent of women trafficked to Europe for the purpose of sexual exploitation are from Edo State, according to a report by the United Nations Office on Drugs and Crime.

But in 2018, the Oba in response to calls by the Federal Government agencies like the National Agency for Prohibition of Trafficking in Persons (NAPTIP) to curb the inhuman activities, summoned all native doctors to his palace.

Ewuare II also laid curses on human traffickers and native doctors who convinced victims to take an oath of secrecy.

The penalty was a minimum of five years’ imprisonment plus a fine.

Meanwhile, during the conference on Friday, the Oba insisted that it was not possible to enjoy oneself in a state where there was no peace.

He said, “You cannot enjoy yourself when there is a quarrel. You need to act in a traditional manner. We are not happy about that. First of all, I tackled the issue of human trafficking before me. I had to come out and speak. Then the next was… let me say the CDA issue, then the human trafficking issue.

“I said Ok I will. And I came out because they were rubbishing the image of Benin and I can’t stand here and let them rubbish the image of my people. So, we had to do something about it that has never been done. Even the chiefs were surprised by what I did that they never knew that we had such traditional devices that could command.”

Advertisement
Related Topics:All Edo Witch Doctors Are Under My Control - Oba Of Benin
Up Next