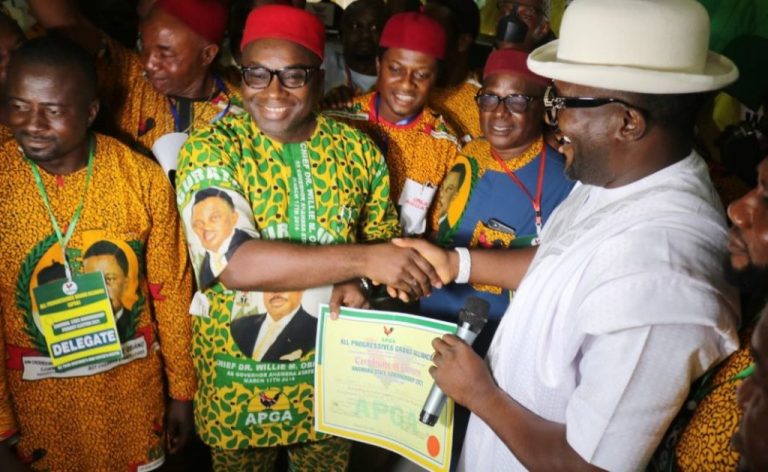 The Ohanaeze Ndi Igbo Youth Movement has hailed the Independent National Electoral Commission (INEC) for listing Chuma Umeoji as the governorship candidate of the All Progressives Grand Alliance in the November 6 Anambra governorship election.

INEC had, last week, published the names of governorship candidates and their running mates for the November 6 election as submitted by their political parties.

However, INEC recognised Umeoji nominated by the Jude Okeke-led faction of APGA, as the candidate of the party, while the Victor Oye-led faction presented Soludo’s name to INEC.

But in a statement on Monday by its spokesman, Uche Nnamdi, the Ohanaeze Ndi Igbo Youth Movement, expressed delight over the INEC’s decision.

The group noted that INEC’s decision to name Umeoji as the candidate of APGA gives hope to the Anambra people, the South East and indeed Nigeria.

It noted that the judgment of the Jigawa High Court, which was recognised by INEC in taking its decision, was in compliance with jurisdiction demands on issues concerning intra-party disputes.

The youths urged the people to read the judgment which dwelt on who is APGA Chairman, and not about who emerged APGA candidate as people are erroneously believing.

The group said, “The Jigawa Judgment was a landmark judgment delivered in compliance with Jurisdiction demands on issues concerning intra party dispute.

” We urge everybody to go and read the judgment which dwelt on who is APGA Chairman and not about who emerged APGA Candidate in Anambra as people are erroneously believing.

“We also note with delight that with Umeoji on the ballot for the next election, there is a guaranteed bright future for the state.

“We therefore urged the people of the state to contribute their quota to making the prosperous future possible by supporting Umeoji’s candidature and voting for him overwhelmingly.”

Abaribe Speaks On Defecting From PDP To APC