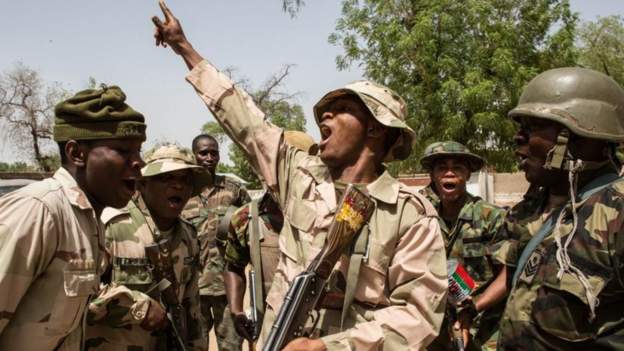 TrackNews Online reports that the soldiers have blocked all access to the community following an attack and killing of soldiers by suspected hoodlums at a military base in Obodo community.

It was gathered that the blockade by soldiers has made it impossible for people to come in or go out of the area since last week,.

Also, it has led to the food crisis in the affected communities with over 200,000 residents trapped.

Reacting, the President of Egbema Leaders of Thought, Elder Edmund Tiemo, said: “We wish to draw the attention of the civilised world to the fact that Egbema people in Delta State are currently facing starvation.

“It is comparable only to what is happening in the Tigray region, where Ethiopian soldiers refused to allow UN peacekeepers and food to get to the civil population.

“This gruesome picture is the situation in Egbema Kingdom of Warri North, today. The JTF has laid siege to a whole kingdom for the crime committed by a few persons in another local government area and this is uncalled for.

“While they denied our people food and medical attention, the army moved food to soldiers who guide critical oil facilities in our land.

“They have food, light and medical attention in their facilities in our territory, yet, as if it is not enough punishment that we lack these essential commodities.

“Our appeal, therefore, is to the authorities to open the Egbema Kingdom for life to return while the investigation, arrest and prosecution of the hoodlums can continue.

“In other climes, where crime is committed, security men take time to investigate and bring the culprits to justice with the collaboration of the locals.

“We have been and are being punished for a crime that was committed outside our local government area.

“The background to this crisis is the alleged attacked on a military base station at Obodo in Warri South Local Government Area, where soldiers were allegedly killed by hoodlums.

“Although no official statement on the attack has been issued by the JTF, the soldiers had told passengers on the Benin River and Gelegele axis of the attack, thus justifying the blockade of Egbema since July 2, 2021, when the incident reportedly occurred.

“Before this incident, on June 28, 2021, few kilometres from the scene as the Egbema peacekeepers came under attack by unidentified gunmen, leading to loss of several lives. Thus, the military operatives who were attacked are victims just like the Ijaw in the area were also victims of criminal attacks.

“Therefore, it will be wrong for people who have suffered the same magnitude of losses to be subjected to this horror.

“The fundamental rights of the people to move as entrenched in Section 41(1) of the 1999 Constitution as amended have been clearly violated in the guise of chasing after hoodlums.

“Why on earth should the innocent populace suffer because of the crime of an unidentified few? We cannot agree less with Senator Enyinnaya Abaribe when he asserted that the Nigerian government of President Buhari operates two sets of laws.

“In the North where criminals kidnap, terrorise and kill both soldiers even school children, none of the communities is unduly punished for the crime of the few.

“President Obasanjo introduced it in Odi in Bayelsa State and now it has been taken to a higher level, whereby a whole kingdom of not less than 200,000 people is under siege for over five days consecutively without movement of people and food items.”

Related Topics:Army Locks Down Delta Community Over AttackKilling Of Soldiers
Up Next