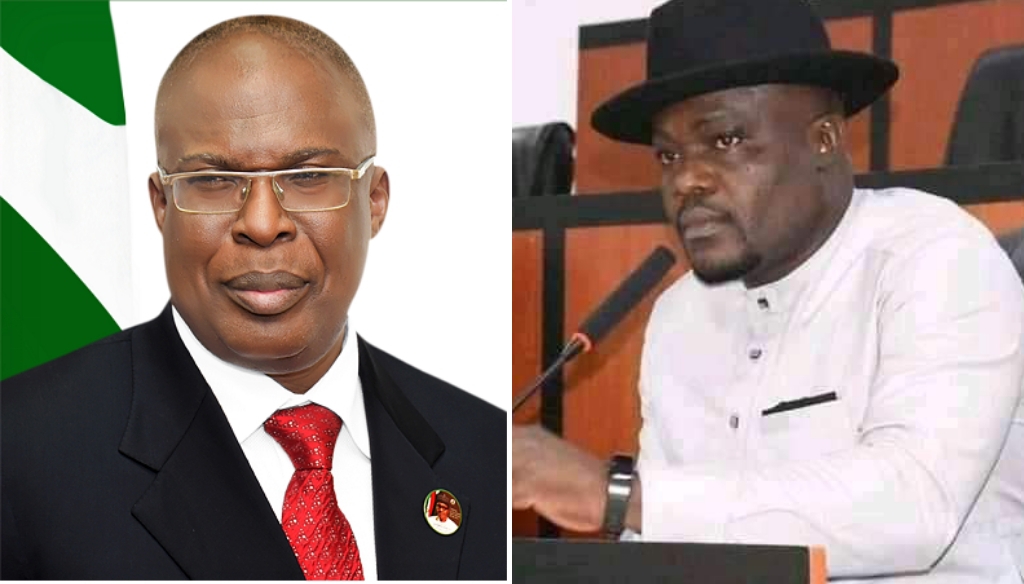 In this part of the world, celebrating the living and its outstanding achievements and contributions to humanity is not an easy value to come by. Rather than celebrating the achievements of people alive, people reserve such moments for funeral days to deliver all kinds of funeral orations to celebrate the deceased. We thank God, some of us cannot afford that luxury and have moved on to change the narrative by giving honour to whom it is due, while he or she is still alive. This is where Chief Timipre Sylva, the Honourable Minister of State for Petroleum Resources comes in as one of the few Nigerians, whose name has come to occupy a chapter in the contemporary history of Nigeria.

This is not because of the NNPC Tower high rise building he occupies as the Minister of State for Petroleum Resources but based on the empirical indices of his nationalistic, patriotic and detribalised values and contributions to national cohesion and development in general. This is the angle for reflection with this piece as his birthday anniversary celebration comes up on the 7th of July. First, his foray into the murky water of politics in 1992 was tortious and full of hills and valleys but eventful.

In 1992, against all odds as a green horn in politics, he got the first baptism of fire when he was elected into the Old Rivers State House of Assembly at the tender age of 26, just few years after his graduation from the University of Port Harcourt where he studied English and Literary Studies. The young Sylva who was fascinated by the academic resume of Professor Wole Soyinka, the Nobel Laureate, who distinguished himself as a professor without Ph.d and wanted to be like him. Other thoughts of career choice that ran through his mind, was to be a journalist. Rather, providence swept his feet to the Old Rivers State House of Assembly to represent and directly serve his Brass- Nembe Island of Oil and gas in the Niger Delta area.

Little did he know, providence was preparing him to compensate the Nembe-Brass people who had historically suffered neglect and marginalization despite being the highest contributors of oil revenue in Bayelsa State to the national coffers. When he took over as the Honourable Minister of State for petroleum Resources, Chief Sylva rolled out a nine point agenda to confront challenges in the oil sector as follows:

Curbing the problem of cross border leakages of petroleum products

Reducing the cost of crude oil production by at least 5%

To complete the process of gas flare commercialization programme.

Apart from the above, Timipre Sylva, who is often described as the “Creek boy” has attracted key transformational projects, not only to Bayelsa and Rivers State but to the greater parts of the Deltaic region. In Rivers State, besides the on-going rehabilitation of the NNPC in Port Harcourt, only few weeks ago Sylva led a team to inaugurate the construction of NLNG 7-Training projects. These are critical projects that will transform the lives of the people with the combined creation of 70,000 job opportunities.

Sylva who went for the grand breaking ceremony personally pull through a creek in a local boat (canoe) and paddle with the NNPC Group Managing Director, Mr Yele Kyari on board. This was a no mean feat, attracting the admiration of the people of Bonny Island in Rivers State, receiving lots of commendation describing him as a true “creek boy.” In civilized climes, this singular and heroic act of personally pulling a boat in a turbulent river could have earned him a national honour and celebration.

For Sylva, it is not about doing so to earn a national honour; it is for altruistic purposes and national service and nothing more. But for those who know the risk involved in crossing such high sea, he deserves celebration. The question is how many Ministers from the Niger Delta can take the risk to place their lives on the line as a high ranking public officer of the Federal cabinet? This is just to ensure that the Nigerian NLNG train 7 final investment, sees the light of day for the benefit of Nigerians. This is coming on the heels of very difficult investment climate in the country due to Covid-19 pandemic.

This can be considered as a milestone achievement to convince investors in NLNG to agree to invest in the expansion of the NLNG production in spite of the twin problems of COVID 19 and the security challenges in the country. Besides the launching of the gas network code, the take-off of the Abuja-Kaduna-Kano gas pipeline project, otherwise known as AKK is one achievement which the Honourable Minister will be remembered for. This project is designed to take the abundant gas from the Niger Delta to other parts of the country for industrial purposes.

Also, the Ministry of Petroleum Resources under the supervision of Chief Timipre Slyva has become a formidable front driver in the process of diversifying the country’s mono cultural economy by exploring and promoting the midstream sector of huge gas production, for both local consumption and export purposes. Interestingly, despite the enviable profile with a comparative advantage of having the largest reserves of natural gas in Africa, yet Nigeria has the lowest gas utilization in Africa. This is where the Honourable Minister is in the forefront of galvanizing critical stakeholders in pushing forth the purpose of the Petroleum Industry Bill, PIB, to provide legal framework for the midstream sector to fully take-of.

Unlike in the past when the country was dependent on oil production alone, the on-going diversification through gas will create lots of jobs to stimulate the nation’s economy. This is an addition to creating the National Gas Expansion Programme basically to exploit the country’s comparative advantage in the abundance of natural gas reserves. To this end, gas will not only be readily made available for household use but will also make Nigeria to proudly join the rest of the world were gas has become the alternative to premium motor spirit, otherwise called fuel for the use of cars. The Minister had already hit the ground running as he has demonstrated the will to lead by example by converting all his official vehicles to gas.

Furthermore, the history of efforts to deregulate the petroleum sector cannot be complete without reference to the pivotal role of Chief Timipre Sylva. This is an area which successive administrations could not summon the political will to effect it and have failed after several efforts. The exercise was either marred by labour protest or lack of the political will. Today, under the supervision of Mr Sylva, trillions of naira being frivolously wasted in the past on fuel subsidy, as well as sharp practices of round tripping and corruption that characterised the sector is now a thing of the past due to the full implementation of deregulation policy. This is done in collaboration with Labour and other stakeholders. According to Timipre Sylva, “There are quite a lot of things we can easily point at, that we are very proud of as our achievements. The deregulation policy is one of them”

Apart from nipping in the bud the perennial problem of scarcity of petroleum products and long queue for fuel, the completion and commissioning of the 17 storey Headquarters building of the Nigerian Content Development and Monitoring Board, NCDMB and commissioning of the Walter Smith Modular Refinery, developed with 30 percent equity from the NCDMB are sterling success story for the Timipre Sylva led Ministry of Petroleum Resources.

NCDMB which is an agency under the Ministry of petroleum Resources is also currently developing three oil and gas components with each expected to create about 2,000 job opportunities when fully operational.

The minister has also changed the story of the opague character of the financial books of the NNPC by entrenching the values of transparency and accountability. For the first time in the over 40 years of the operation of the NNPC as a National Oil Company, it published the 2018 and 2019 financial reports with wide commendations across the country and beyond. This is a radical departure from the past when its financial books were treated with utmost secrecy.

This was not a surprise to those who had monitored closely his much cherished principle of transparency and accountability in governance while he served as governor of Bayelsa State. He was indeed one of the first governors to initiate a bill and passed into law on public procurement and transparency.

Another notable project that will bring about serious transformation in the oil producing Island of Nembe-Brass area of Bayelsa State is the #10.5 billion, 50 million litres Brass Petroleum products terminal project, estimated to generate 1,000 direct jobs at the stage of construction and over #5,000 indirect jobs when it becomes operational, are heart-warming.

According to a public affairs analyst, Mr. John Okhai, “When you also take into cognizance the $3.5 billion Brass Fertilizer and Petrochemical Company Limited (BFPCL) a 10,000 tonnes per day methanol plant, projected to generate about 3,000 direct and indirect jobs during its construction and 5,000 jobs at completion”.

Moreover, Sylva’s heroic exploits in the wake of militancy in the Niger Delta when he was governor cannot be forgotten. While other Niger Delta governors were afraid to dare, the Honourable Minister stuck out his life at great peril by traversing the most dreaded militant camps in the Niger Delta to preach the message of peace and national development. This singular action yielded fruits with multiplier impact.

The price of crude oil which had plummeted and generally shut down the economy of the country because of activities of militancy in the country was restored through the nationalistic approach which he brokered peace between Federal Government and the militants culminating in the initiation of the Amnesty Programme.

According to a legal practitioner and journalist Mr Jonah Okah;

“If other regions in the country can produce one Timipre Sylva with uncommon courage and dexterity in the fight against banditry and insecurity in Nigeria, security challenges would be a thing of the past. Just as Sylva stepped on big toes patronising the activities of militancy in the Niger Delta, he would have replicated same if the situation presents itself. Sylva fought headlong on the side of history in restoring peace in the oil producing Niger Delta”.

Many people believe that Sylva was denied second tenure by the then ruling Peoples’ Democratic Party, PDP, because some elements were not comfortable with his nationalistic profile. Only recent, he resisted the pressure by the governors’ forum to jerk up the pump price of petroleum products. This was widely applauded as a nationalistic and patriotic act in public service for being on the side of ordinary Nigerians who would have suffered untold consequences.

The damning verdict by vast majority of people across the country, regardless of geo-political configuration is that, the Honourable Minister of State for Petroleum Resources, Chief Timipre Sylva is a detribalised personality in the contemporary political firmament and public service, who has severally risen to the occasion in sacrificing his all in promoting national cohesion, unity, peace and security.

It is against this background, there should be no hesitation to celebrate what one can call “iconic personality and living legend of our time”. What the time demands is for Chief Timipre Sylva to remain focused and should not let up the fire spirit in his avowed commitment to serve Nigeria to the best of his ability.