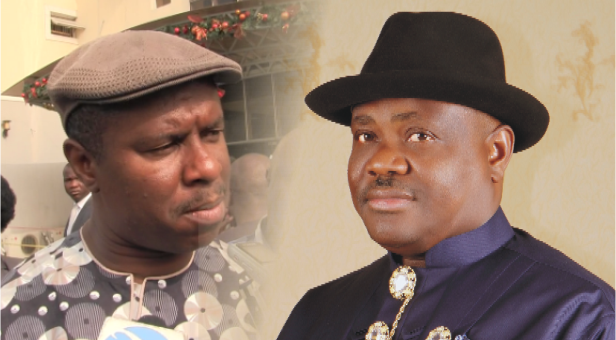 The Governor of Rivers State, Nyesom Wike, on Tuesday publicly poured invectives on the former Director-General of Nigeria Maritime Administration and Safety Agency (NIMASA), Dakuku Peterside, calling him a ‘cockroach’ and ‘cultist’.

Taking a swipe at the administration of former Governor Rotimi Amaechi for supposedly mismanaging the resources of the State, Wike alleged that Peterside, considered a very close ally of Amaechi, was a cultist whilst a student at the University of Port-Harcourt.

He blamed Amaechi, now Nigeria’s Minister of Transport, for installing stooges who lacked experience in governance but ready to act as conduits for siphoning the State’s resources.

Lambasting Peterside, Governor Wike referred to him as, ‘Cockroach, stinking mouth talking to me.’

NIMASA boss to trace his roots and convince the people of Rivers State that he was, indeed, from Opobo land.

“I am a true Ikwerre son. I know where I come from. Peterside should tell Rivers people where he hails from,” Wike said while the audience clapped.