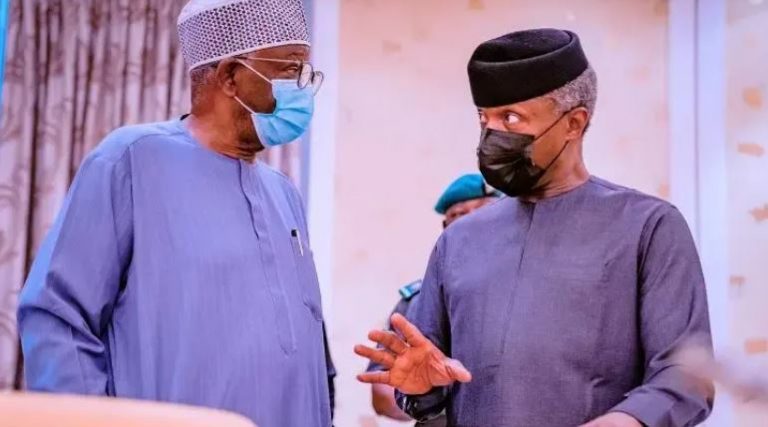 There was confusion on Saturday when the role of the Vice-President, Yemi Osinbajo, and that of the Chief of Staff to President Muhammadu Buhari, Ibrahim Gambari, clashed at the coronation of Alhaji Aminu Ado Bayero, Emir of Kano.

The new Emir of Kano, Ado Bayero received his staff of office, on Saturday.

There was drama when the Master of Ceremony, invited President Buhari’s COS, who is also an uncle to the Emir, to deliver a goodwill message.

Gambari while delivering the address disclosed that he was reading the speech on behalf of the President.

The statement of the Chief of Staff contradicted the previous announcement of the MC, who had earlier referred to Osinbajo as the representative of the president.

In the message read by Gambari, he quoted Buhari as extolling the virtues of the late Emir of Kano and father of the current Emir, whom he described as a man of remarkable culture and principle.

“I remember with nostalgia, the passion and commitment he always exhibited in pursuit of any cause he believed in, a distinctive character that almost cost him his life prematurely on January 19th, 2013 because of his vociferous stand against Boko Haram terrorists.”

“Your turbaning is providential because it is happening at a time in the history of our country when prevailing social and political conditions resonate with the ascension to the throne of my friend, your late father.”

When it was the turn of Osinbajo to speak, he also said he was representing the president.

Speaking in Hausa to the cheering of the crowd, the VP reiterated the popular saying of Kano people that “Kano ko da mai ka so, an fi ka”, which closely translate as with whatever you arrive in Kano, the city or its people will surpass you.

“We are all proud of this city, proud of its legacy of tolerance and warmth and that it remains a home for all Nigerians,” he added.

Related Topics:Confusion As OsinbajoGambari’s Roles Clash At Emir Of Kano’s Coronation
Up Next